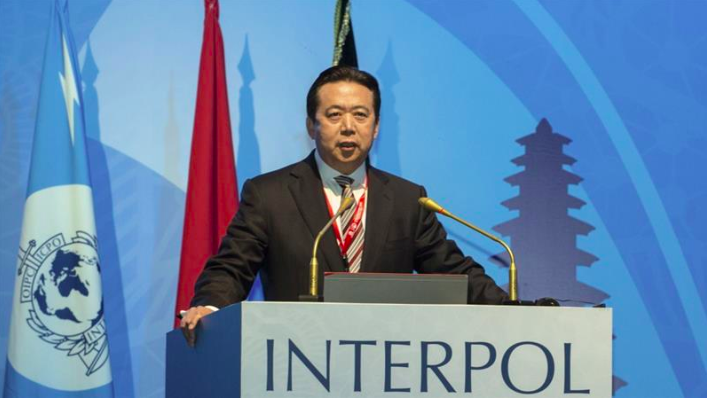 The Guardian reports that former Interpol president and Chinese vice minister for public security Meng Hongwei has pleaded guilty to charges of accepting more than $2 million in bribes during a court hearing in Tianjin on Thursday. Meng has been under investigation since October 2018 after vanishing into custody during a visit to China from his home in Lyon at the end of September. Meng’s case is one of a series of high-profile disappearances that have been cited as examples of Chinese authorities’ increasingly uninhibited actions.

The No. 1 Intermediate Court in the northeastern port city of Tianjin said Meng read a statement containing the confession at a hearing.

[…] A confession assures a conviction but it was not immediately clear when a verdict and sentence would be handed down. Confessions, which are often televised, have become a hallmark of President Xi Jinping’s rule.

Admitting guilt and expressing regret can result in slightly lighter punishment, though China has been quick to hand out life sentences for corruption under a campaign run directly by the president, Xi Jinping.

[…] The Tianjin court said Meng had abused his positions, including as a vice minister of public security and maritime police chief, to take bribes.

Shown on television wearing a plain brown windbreaker and flanked by two bailiffs, Meng appeared older and grayer than during his time as one of the nation’s top law enforcement officers. He has already been fired from his positions and kicked out of the Communist Party. [Source]

The Australian Associated Press has more on Meng’s alleged crimes:

In March, the ruling Communist Party said its investigation into Meng found he spent “lavish” amounts of state funds, abused his power and refused to follow party decisions.

“Meng Hongwei made final remarks, and admitted guilt and expressed remorse to the court,” the official People’s Daily said of the hearing.

The paper added that his alleged crimes in various posts, including when he was deputy minister of public security and head of China’s coast guard, went back to 2005.

[…] It is not clear who Meng’s lawyer is and it was not possible to reach him or a legal representative for comment. Chinese courts are tightly controlled by the Communist Party, and Meng is almost certain to be found guilty. [Source]

Meng is the latest high-ranking official to be caught in President Xi Jinping’s anti-corruption campaign, which has targeted cadres at all levels of government and military bodies. Critics have argued that the ongoing campaign is being used by Xi as a political tool to take down rivals and that Meng’s case is no exception. From Aljazeera:

More than one million officials have been punished so far during Xi’s six-year tenure. He has vowed to target both “tigers” and “flies”, a reference to elite officials and lower-level bureaucrats.

As vice security minister, Meng oversaw as number of sensitive portfolios, including the country’s counterterrorism division, and he was in charge of the response to violence in China’s fractious northwestern region of Xinjiang.

During his time as vice security minister, the public security bureau arrested and interrogated a number of prominent Chinese dissidents, including Nobel Peace Prize laureate Liu Xiaobo, who was arrested in 2008 and died of liver cancer in 2017 while still in custody.

Meng’s appointment at Interpol raised eyebrows, with human rights groups concerned that Beijing would use the organisation to round up Chinese dissidents overseas. Meng had been expected to serve a four-year term, ending in 2020. [Source]

#China Meng Hongwei prosecution hardly a fair trial—and kills prospect that he will ever be held accountable for abuses by MPS during his tenure at the top. What rule of law? ⁦@hrw⁩ ⁦@hrw_chinese⁩ ⁦@MargaretKLewis⁩ ⁦@jeromeacohen⁩ https://t.co/P1KZuFCcvc

This news on Meng Hongwei reinforces my just-revised draft article on how #China has failed to meet even the minimal obligations under international law as a signatory to the ICCPR. https://t.co/2MamX6EpPC pic.twitter.com/nAbEWkZ2r3