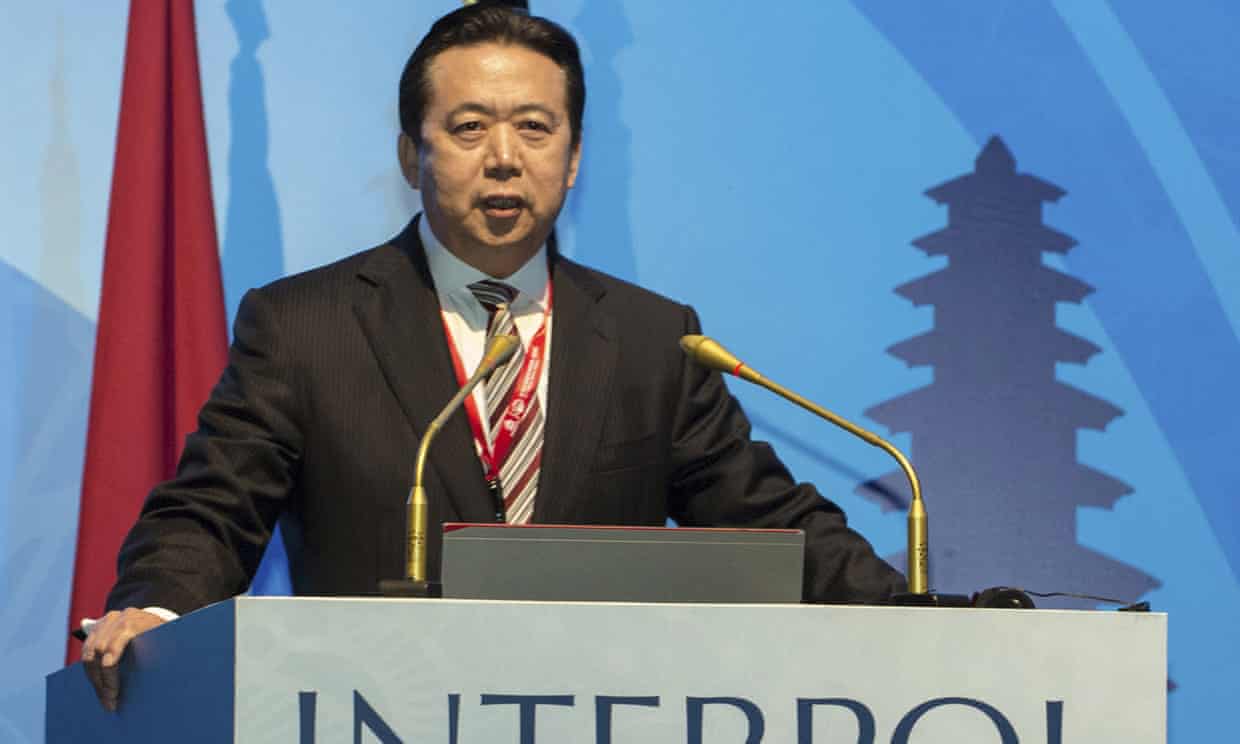 Chinese authorities belatedly explained the disappearance and subsequent resignation of Interpol President Meng Hongwei with a terse statement that he had been placed “under the supervision” of the National Supervisory Commission, China’s new “super-sized” anti-corruption body. He was also removed from his concurrent role as China’s Vice Minister for Public Security. Minister for Public Security Zhao Kezhi has since revealed that Meng is accused of taking bribes and of association with Zhou Yongkang, the disgraced former member of the Politburo Standing Committee. In an op-ed for The New York Times, Yi-Zheng Lian describes how this development speaks to China’s larger pattern of unrepentance for its actions on the world stage:

Still, people in the non-Chinese media ask, perplexed: Wasn’t the disappearance of Mr. Meng a very clumsy and all-too-public way to dispense with an enemy? He was, after all, one of China’s own leading law enforcement officials, who rose to that rank while Mr. Xi already was China’s president and who was then sent to represent the country as the head of the world’s top law enforcement organization. Is the Chinese government now saying it made a mistake in backing him? Isn’t that a huge loss of face?

The answer is no.

[…] China today is rich and powerful; therefore, it has face and simply cannot be embarrassed. The investigation of Mr. Meng, the public security ministry has said, “is very timely, totally right and very wise.” The foreign ministry spokesman Lu Kang said it showed that the government is determined to combat corruption and that there can be “no privilege or exception before the law” — and that “the overwhelming majority of members of the international community will have correct views and conclusions about this.” Embarrassment is in the eyes of the beholder.

[…] The Nixon-Kissinger-Clinton thesis — that helping China develop its economy would bring about a middle class that would then push the country to democratize and become a responsible stakeholder internationally — is now widely recognized as wishful thinking. The reverse is proving true: For China today, having face means being shameless. And the rest of the world may just have to get used to that. [Source]

At the Washington Post, Gerry Shih delves into how Meng’s arrest fits into a “new normal” of investigations and purges, while highlighting its potential pitfalls:

Chasing suspected fraudsters, influence peddlers and others remains popular with the public. But Xi’s campaign also shows other tumult within the upper ranks of China’s leadership, business world and security apparatus.

[…] Despite rounds of purges in recent years, “one serious problem that Xi Jinping faces is that the administration is still actually poorly run,” said Willy Lam, who studies Chinese politics at Hong Kong University. “They should have their house in order by now, but they don’t. That could affect China’s ability to carry out policy or fight the trade war with the U.S.”

[…] “Once you establish and empower agencies to investigate, they will inevitably find more and more people to lock up,” said Zhang Ming, a retired professor of political science at Renmin University in Beijing. “Eventually, it hurts the party’s prestige and the public confidence in it.”

[…] Jude Blanchette, a China expert at the Crumpton Group, said the never-ending corruption crusade is a distraction for Xi, but it also serves to keep the Communist Party — and vast swaths of Chinese society — in a permanent state of tension and under his sway. [Source]

Meng’s wife, Grace Meng, made an impassioned plea for international help earlier this month, highlighting his last message to her—a kitchen knife emoji, which she believes signals he was in danger. She has since refused to meet Chinese officials who claim to have a letter from him unless others are present, saying that “everyone is at risk.” From the Associated Press:

“I’m sad, I feel hopeless but angry, too, even hate,” she said. “You can imagine when your children, when your sons ask: ‘Where’s Daddy?’ How can I answer? Who wants their children to grow up (when) they have no daddy?”

Grace Meng said she cannot believe the bribery accusation against her husband and claimed he is the target of “political persecution.”

“The term anti-corruption in China has become a synonym for crimes that are unjustifiable,” she said.

China’s move to secretly detain the Interpol president, an official with international standing, was an unusually audacious action even for an administration that under Xi’s leadership has sought to assert its interests aggressively on the global stage.

Grace Meng said she was speaking out about her husband’s case, at risk to herself, not just to defend him but also to highlight the fate of others who have disappeared into China’s opaque police system. [Source]

Lily Kuo at The Guardian reports on Grace Meng’s fears that her husband may now be dead:

“I think it is political persecution. I’m not sure he is alive,” Grace told the BBC. “They are cruel. They are dirty,” she said, referring to the ruling Chinese Communist party.

Meng Hongwei is likely in a new form of custody called “liuzhi”, overseen by the National Supervisory Commission (NSC), a super-agency created in March to investigate corruption throughout the government.

Liuzhi, or “retention in custody”, is meant to be an improvement on the system it replaced, “shuanggui,” a disciplinary process run by the party that was known for its use of torture.

Under liuzhi detainees can still be denied access to legal counsel or families for as long as six months, and human rights advocates do not believe it will be much better.

[…] Grace Meng has previously said she received a threatening phone call from someone claiming to know where she and her children live. The family is now under French protection. [Source]

According to a 2016 report by Human Rights Watch, there had been at least 11 deaths in shuanggui since 2010. In May, Caixin reported the first known death under its replacement. The article’s Chinese-language version was swiftly deleted.