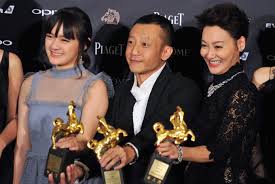 The Chinese Film Association has barred mainland actors and directors from participating in the Golden Horse Awards, Asia’s most prestigious film honors, which are hosted in Taipei. At last November’s awards ceremony, when accepting an award for her independent documentary, “Our Youth in Taiwan,” Taiwanese director Fu Yue spoke emotionally about her wish for Taiwan to be treated as “an independent entity.” The speech was censored in China as were news reports about the ceremony, and Chinese celebrities boycotted the remainder of the event. It was later announced that “all joint productions and domestic films will not be allowed to apply for the Golden Horse Awards.”

No specific reason was given in the announcement, which was made on the government-linked China Film News blog.

The Golden Horse organising committee said this year’s event would go on despite China not participating.

“The committee regrets to be informed of the news, if it is confirmed,” it said in a statement to the Associated Press.

“The jury process of Golden Horse Awards is ongoing and will continue as planned, and all Golden Horse events will take place as usual.” [Source]

Patrick Brzeski of the Hollywood Reporter has more on the reasons for the block:

“The China Film Administration has suspended mainland films and personnel from participating in the 56th Taipei Golden Horse Film Festival and Awards in 2019,” read a short statement that went out across Chinese state media on Wednesday. In addition to the awards show, the Taipei event also runs a well-respected citywide film festival bringing together the year’s finest Chinese-language cinema, along with other international film programming.

The current imbroglio began when 36-year-old Taiwanese director Fu Yue took the stage to accept the prize for best documentary last year, saying: “I really hope that, one day, our country can be treated as a truly independent entity. This is my greatest wish as a Taiwanese person.”

[…] Many citizens of democratic and self-governed Taiwan hold passionate convictions about the territory’s independence, whereas Beijing views the island as a renegade province that ultimately belongs to mainland China. [Source]

Some involved with the film industry, along with Taiwan’s President Tsai, expressed disappointment that China was missing an opportunity to promote their best movies on an international stage. The Chinese-government backed Golden Rooster Award ceremony will be held the same day:

Beijing has been using the international stage to assert its sovereignty over the island amid rising Chinese pressure, which also includes military drills. Taipei repeatedly said the Chinese moves were aiming to manipulate the island’s presidential elections in January.

“From an industry point of view, the Golden Horse was a good platform for exchanges on films among mainland, Taiwan and Hong Kong,” said Dong Shu, a Shanghai-based film critic.

“But some people in Taiwan had to get politically sensitive content on it, things that crossed red lines for mainland China, thus the nature of this award has been changed.” [Source]

Christopher Bodeen of AP reports on the response from President Tsai’s office:

“Culture has no borders and art especially should not face political barriers. No matter what the reason, it’s not a smart move to prevent those in arts and culture from participating in this sort of a film industry event that encourages free creation and welcomes multiple viewpoints,” Ting said. [Source]

Tensions between China and Taiwan have been on the rise since the election of Tsai Ing-wen. Last month, Beijing suspended a program allowing individual tourist travel to the island, and labeled Taiwanese “separatism” a major security risk in a recent defense white paper. In recent years, the Chinese government has also been steadily tightening the grip over films and other cultural products, issuing censorship directives banning a broad range of video content online, and pulling two high-profile films–a patriotic war movie “The Eight Hundred” and a Cultural Revolution era movie by Zhang Yimou–from international festivals.