Translation: “A Mother’s Day Without a Daughter”

CDT Chinese reports that on May 11, a woman from Wuhan publicly petitioned the municipal government to take responsibility for the death of her 24-year-old daughter, who she claims died of the COVID-19. The woman, herself a survivor of the novel coronavirus, held a sign that read “the government concealed the truth of the epidemic, give me back my daughter,” on one side, and “injustice” on the other.

Eventually, the woman was violently driven away by the police and public security. Her protest posters were also taken away.

@stanleynordic: They took away her posters and prohibited her from voicing her grievances. Ms. Yang, the mother of a coronavirus victim, is asking the government to disclose the truth and give an explanation for the death of her daughter. The police and security guards brutally seized her protest posters. Her daughter Tian Yuxi died of Wuhan pneumonia at the age of 24.

The woman’s appeal document (dated April 7 and originally shared on her Weibo the day she petitioned for an audience with the authorities) has been translated below. Her core demands are that those responsible be held accountable, and compensation for her lost daughter: 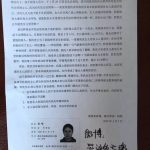 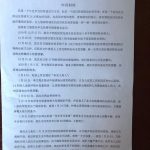 I’m an ordinary, nearly 50-year-old Wuhan resident, and also a survivor of the Wuhan pneumonia. More importantly, I am a mother who painfully lost her beloved 24-year-old daughter to the novel coronavirus. When I face her portrait and look at the flickering candle light, I feel as though she is crying out to me about the grievances she suffered. Scenes of her experience with coronavirus are playing out in my head like a movie.

According to the National Health Commission’s investigative report on the Li Wenliang incident:

On December 27, 2019, Dr. Zhang Jixian, the dean of Hubei Zhongxi Hospital, admitted three patients with pneumonia of unknown cause.

On December 30, Wuhan Municipal Health Commission issued two internal departmental documents, one titled “Emergency Notice on the Reporting of Pneumonia of Unknown Cause Cases and Treatment.” The two documents were later leaked on the internet, but warnings were not issued to the city’s residents. On the same day, Li Wenliang issued a small-scale early warning of the novel coronavirus in a WeChat group.

On December 31, there were already 27 cases of coronavirus infection in Wuhan. Yet, they did not issue a warning to the public.

On January 3, 2020, Dr. Li Wenliang was admonished, with major media outlets reporting on the incident. Even then, Wuhan City did not issue a warning to its residents. Instead, they conveyed false information.

On January 6, a notice was issued on television announcing that “human-to-human transmission has not been observed.”

On January 10, Li Wenliang was infected during a consultation with a patient and developed fever symptoms. On the 12th, he was admitted to the Wuhan Central Hospital, where he worked. On the 14th, he was transferred to the intensive care unit of the respiratory ward. This led the experts from the national investigation team to conclude that the infection of medical personnel occurred by human-to-human transmission. At this time, the public still had not been alerted.

From January 6-10, Wuhan’s two sessions meeting was held with bustle and excitement.

On January 19, the Baibuting community’s “10,000 Family” banquet was held with great fanfare, and made the headlines of major local media outlets, further sending the wrong message to the public. It wasn’t until the evening of January 19 that the third group of experts led by Zhong Nanshan arrived in Wuhan that the lid on human-to-human transmission was lifted.

On January 21 in an interview with [CCTV-affiliated] Dongfang TV about the banquet, Wuhan Mayor Zhou Xianwang admitted that the public was not given adequate warning. We did not know until that day that there were already 62 confirmed cases and two deaths in Wuhan at that time.

My daughter was infected on January 16 when she was seeking treatment at the district Union Hospital. On the evening of the 19th, she began experiencing fever symptoms, which persisted for several days. Even then, the doctors did not dare diagnose her with the coronavirus. She grew more and more ill by the day, until after several setbacks she was transferred to Wuhan’s Jinyintan Hospital on January 25. Due to the rushed response caused by the coverup, the hospital was sorely understaffed. By this time, my daughter was already bedridden, and could not even drink water without difficulty. Her excrement was not being cleaned, and she had to sleep in complete filth. Her daily injection treatment did not alleviate her condition. Instead, it got worse. She began to cough up blood and her blood oxygen level dropped rapidly. At this time, I ignored my family’s objection and risked my life to get to Jinyin Hospital to care for my daughter. My thought at the time was simple–I wanted to use my life and my body to fight against the virus and the pain that it brought to my daughter. However, several days and nights of sleepless caregiving did not save my daughter. She said that she could not breathe. I watched as she opened her mouth wide like a fish taken out of water, struggling to breathe. It broke my heart. I hate that I couldn’t suffer for her!

Just like that, I also began to show fever symptoms. At the time, I only had one thought on my mind: I desperately wanted to live–to take care of my daughter. What I didn’t know was that, on February 6, shortly after my daughter was sent to the ICU, she forever left the family that loved her. To give me the will to live, my husband lied that my daughter was still being treated in the ICU. During treatment, I experienced the same difficulty breathing that my daughter experienced. Every breath took all my strength. My lungs hurt, as if they were filled with pieces of broken glass. Not to mention the high fever that lasted for days, causing mental confusion. Only then did I know how difficult it was for my daughter to get through those days and how much she wanted to live!! When I found out that my daughter had passed away, it was like a thunderstorm. The apple of my eye left the world with such regret and injustice. She was only 24 years old!!

While my body has now healed, the psychological trauma is difficult to mend. When I got home, everything I saw reminded me of my daughter. What were meant to be happy memories have become the most painful ones.

Due to the selfish actions of government officials at the beginning of the epidemic, the truth was concealed and the public was deceived. They disregarded the life and death of the populace, and sowed chaos with their malfeasance. Their actions directly led to my daughter’s death from coronavirus infection, and the deaths of countless innocent people. They indirectly caused the rupture of countless families, devastating them physically and mentally. I here make a special request to the higher authorities:

CDT Chinese editors note that her Weibo account @哭泣的亡魂 (which roughly translates to “weeping departed spirit”) remains online, with 38 posted messages viewable on the account. In the earliest post, from April 4, she tells of the pain of living without her daughter, and of official requests for her to stop posting after she shared a funerary ritual text for her daughter. In later posts, she shares pictures and words of her daughter, reports having messages censored, and also hits back at those who viciously attacked her online amid a flare-up of cybernationalism.

On Mother’s Day, she posted: “Today is Mother’s Day, when I opened my eyes my tears had already soaked through my pillow. Daughter, a Mother’s Day without you is not Mother’s Day. Can you feel your Mama’s tears and longing for you? Are you also missing Mama from the other side? When you were sick you said you dreamed you searched everywhere and couldn’t find your mother. But now, on the other side, you are surely dreaming of Mama, because Mama is missing you every day!”

See also CDT’s translation of another Hubei resident’s stated charges in his attempt to sue the provincial government to publicly apologize for its mishandling of the outbreak. As of last reporting, the plaintiff had promised to appeal to a higher court after being denied at the district level.