Netizens recently noticed that since July, the Zhejiang Provincial Government Services website has been publicly posting “resolutions on administrative punishment” for individuals and organizations charged with “setting up or utilizing illegal channels for international networking without authorization”—i.e., circumventing the Great Firewall. This public list demonstrates that a large number of netizens have already been reprimanded by the police, fined, or had their internet cut as punishment for “scaling the wall” to visit foreign websites. 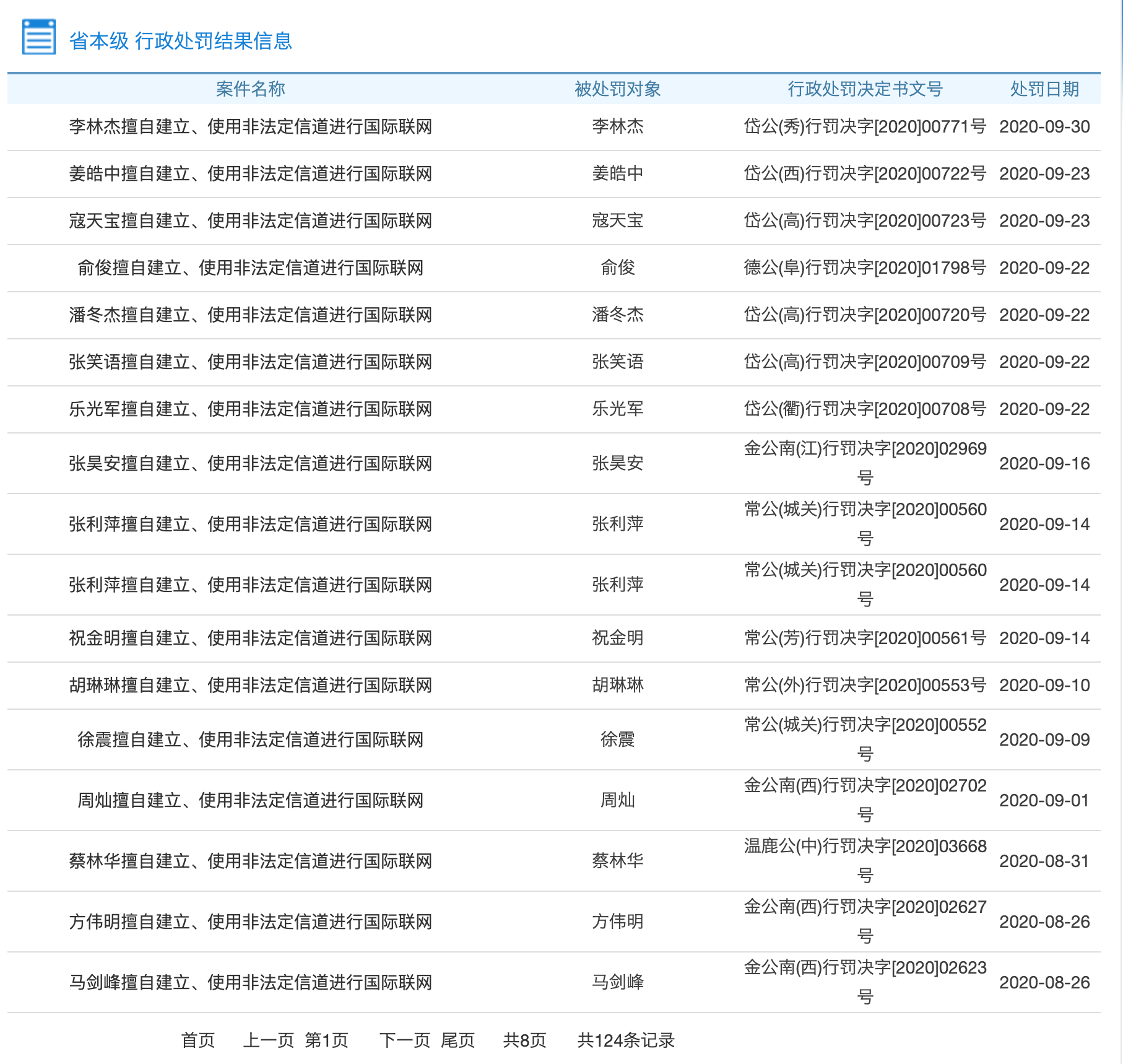 The editors at CDT Chinese note that each order for administrative punishment mentions the specific tool used to scale the wall—such as Shadowsocks, Shadowrocket (SSN), Linkfox VPN, or Wang VPN—but doesn’t explain how the police found this information. The “airport hosts” (机场主, Chinese internet term used to mean internet service providers) are also mentioned, and indication is made that certain businesses have also been punished. 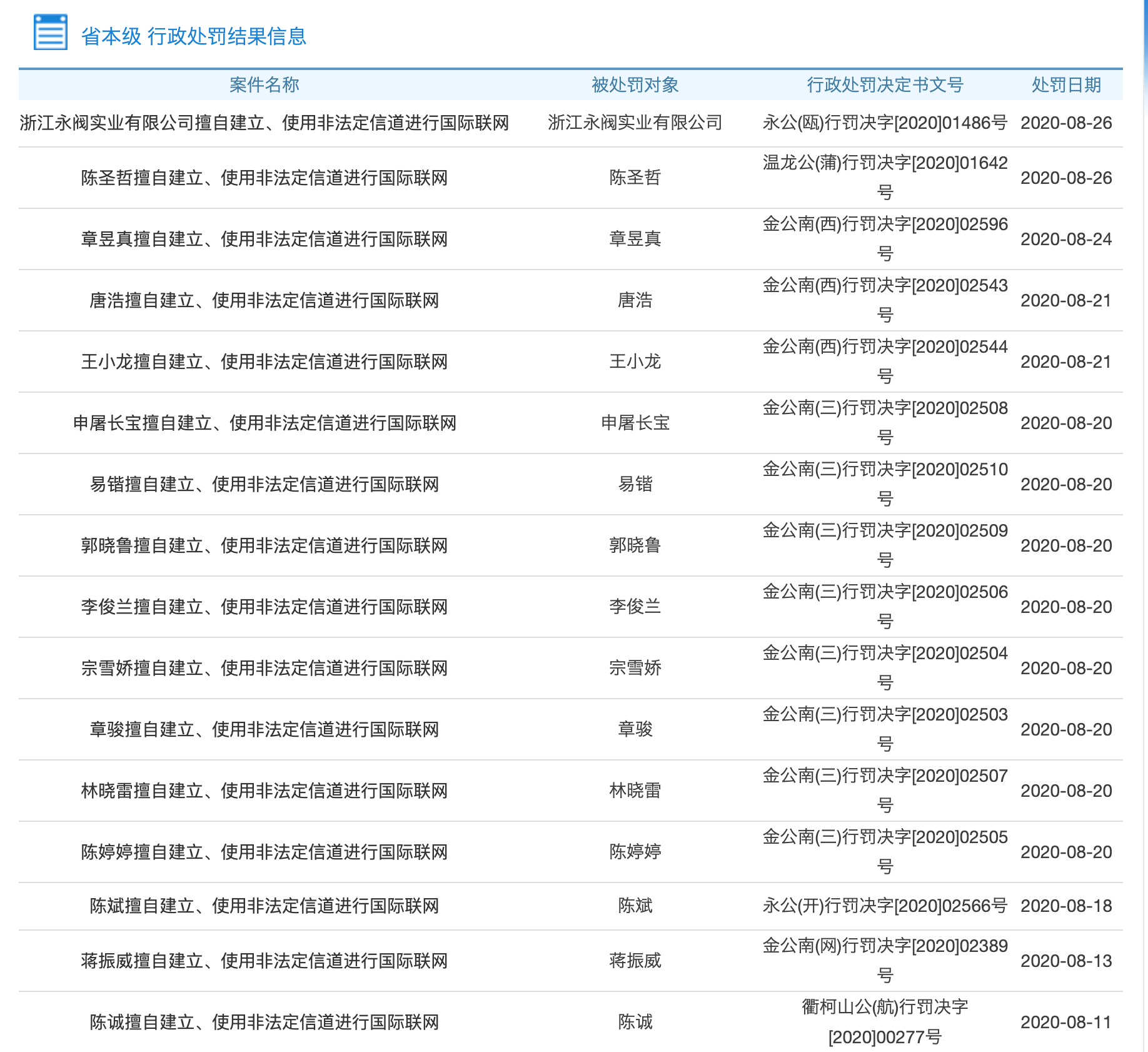 In addition to individuals, several businesses are also listed 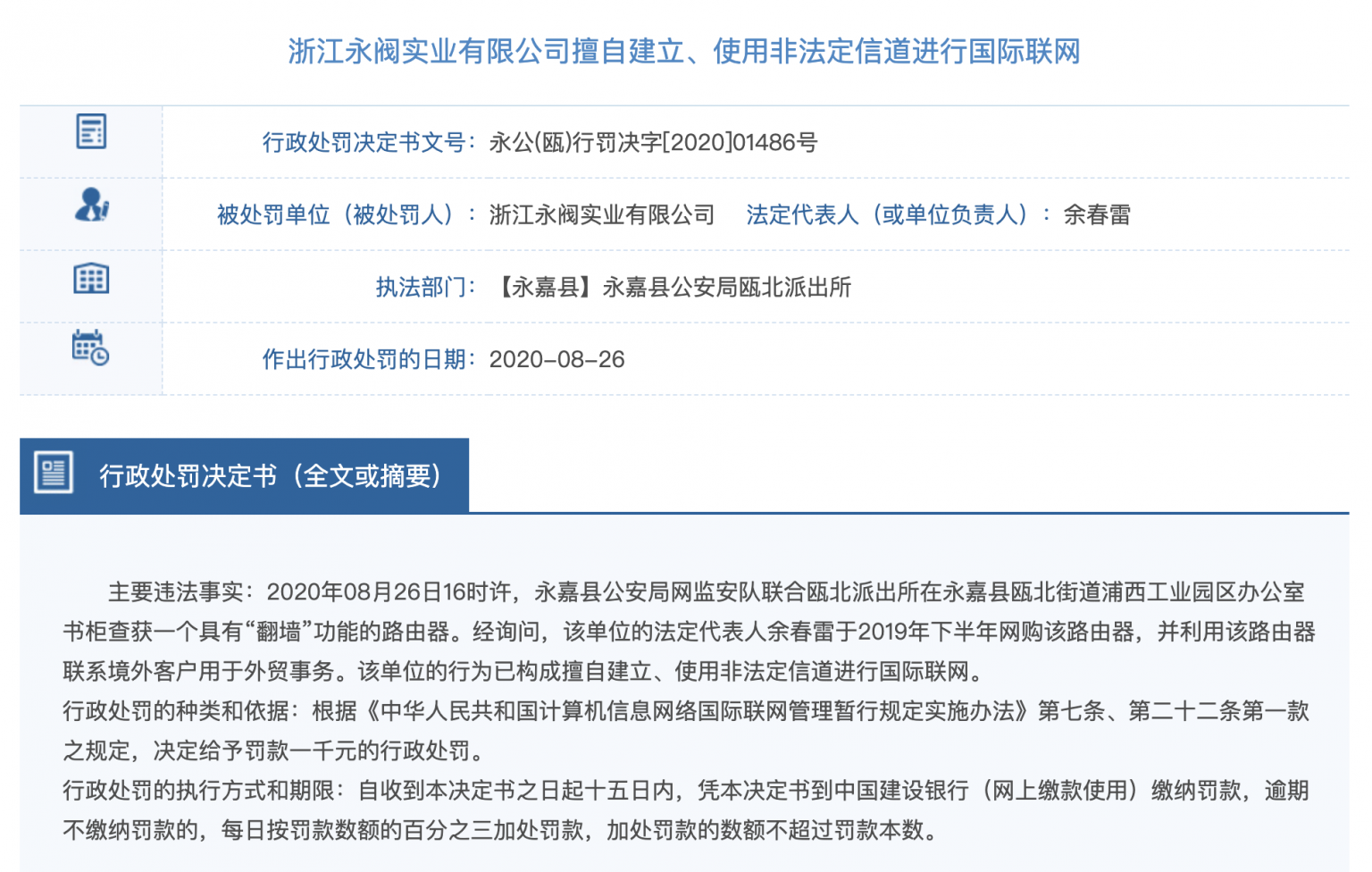 Decision against Zhejiang Yongfa Industries Co. Ltd. and the “legally responsible person” for circumventing the Great Firewall via router in 2019 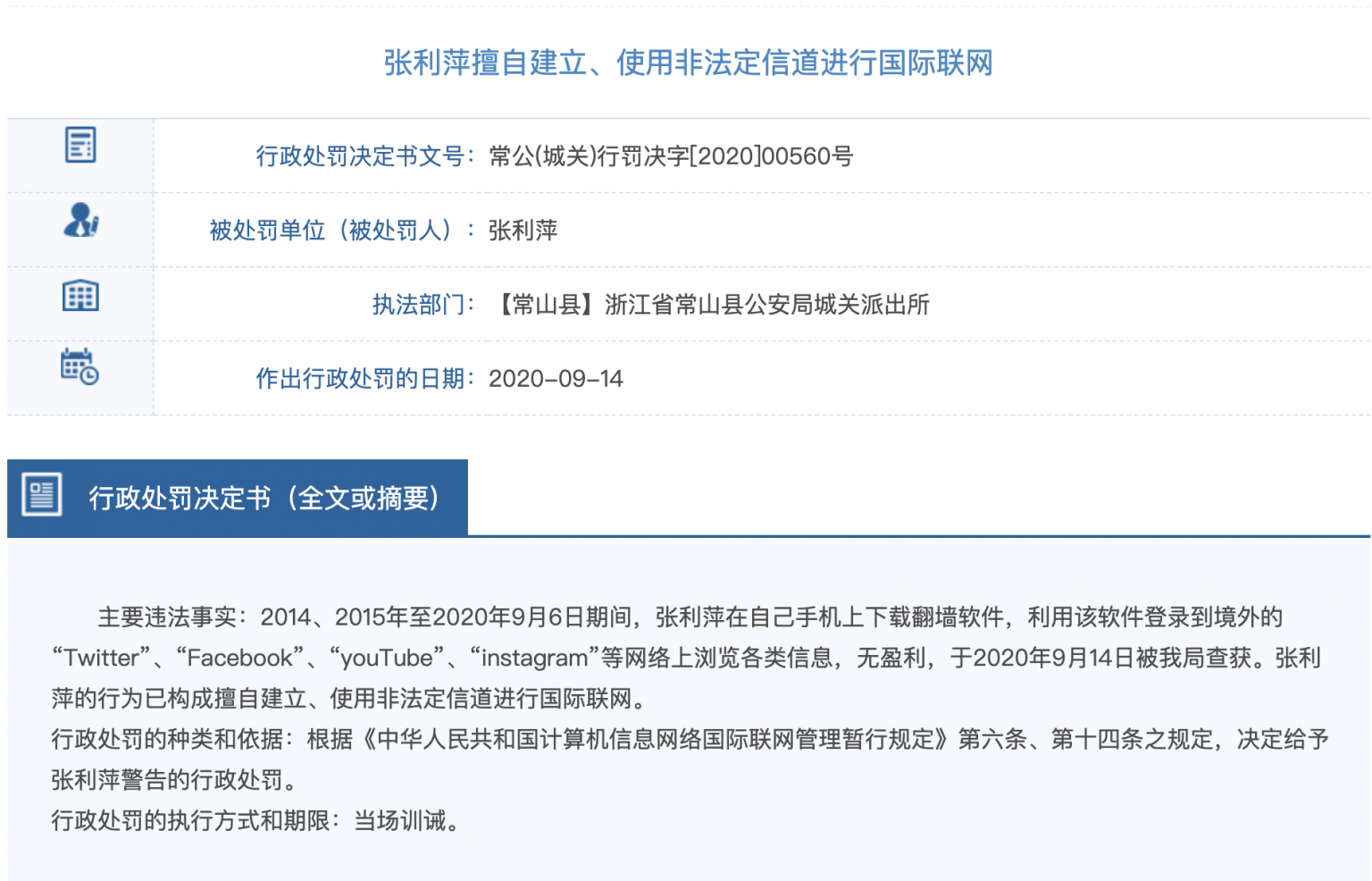 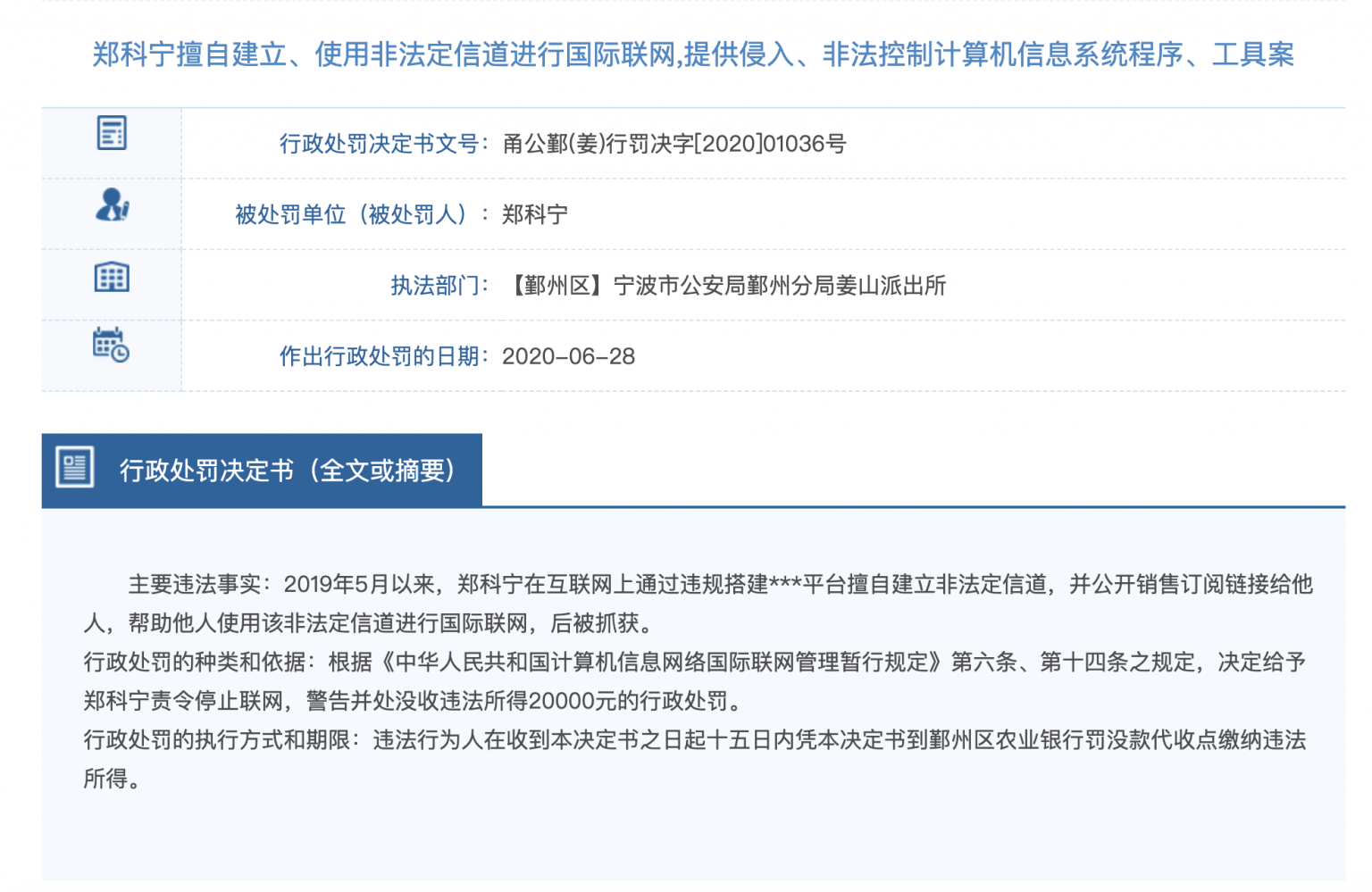 Case of an individual charged with selling subscriptions to their circumvention platform. Their network connection was suspended and 20,000 yuan in profits seized

The “crime,” or “pocket crime,” of “scaling the wall” falls under articles six and 14 of the “Implementation Rules for Provisional Regulations of the Administration of International Networking of Computer Information in the People’s Republic of China” (effective 1998), which define “circumvention of the firewall” to access the global internet as an “illegal” activity that provides the “basis” for Public Security to mete out punishment:

Article 14. Those in violation of the provisions of Article 6, Article 8, or Article 10 of these regulations will receive a warning and have their network connection suspended by order of Public Security, and may be fined up to 15,000 yuan [USD 2224 in 2020 dollars]; illegal income will be confiscated. [Chinese]