China’s anti-war voices continue to suffer censorship as Russia’s invasion of Ukraine goes on. The dominant theme of online discourse is Russophilia, though at least some of that appears to have been orchestrated. The New York Times noted that a Chinese translation of Putin’s rambling speech announcing the attack got over 1 billion views within 24 hours. One Weibo user reportedly wrote, ​​“If I were Russian, Putin would be my faith, my light.” But there was pushback as well. One WeChat essayist derisively labeled those engaged in pro-Russia histrionics “Russians in spirit,” a play on a formula most recently used to satirize advocates for friendship with the Taliban. Anti-war voices on Weibo have been numerous and prolific.

On February 28, Russian state-owned outlet Sputnik shared an article on Weibo that quoted Maria Zakharova, a spokesperson for the Russian Foreign Ministry, as she told a Russian television station that the country still has friends in the international sphere: “Look at the reaction of the world’s giants. Those who do not pretend to be giants, but real giants. Well, in particular, China. You see this reaction.” The article also quoted a tweet from Chinese Foreign Ministry spokesperson Zhao Lijian that showed an image of Uncle Sam pouring fuel on a fire labeled “Ukraine,” with the caption: “The US should ask itself who’s the one that started all these.” China’s government has joined Russia’s in emphasizing NATO expansion as the cause of the conflict, but this stance and the Sputnik post elicited dismay from some Weibo users. CDT compiled and translated a sampling of the reactions below:

@每天进步一点点6666：Don’t make China complicit in this. We don’t support you launching a war. Don’t muddy the waters on this point.

@陈易训xl：No one, except my son, can speak on my behalf. I don’t want to be friends with the invaders.

@埖丅誰：This is a disgrace to our government.

@sBatman7:  Do you know why Kung Fu Panda’s dad is a goose? [“Goose” and “Russia” are homophones in Mandarin.]

@啰嗦啰嗦男：Photo Commentary [Side by side screenshots show mixed messaging about Russia’s alliance with China.] 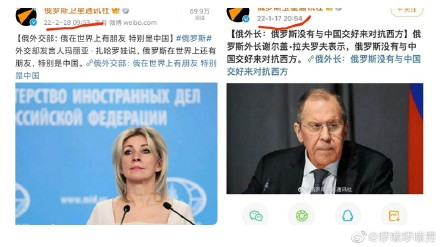 RIGHT: On January 17, 2022, Russian Foreign Minister Sergey Lavrov commented that Russia is not befriending China in order to confront the West. [Chinese]

China’s LGBT icon, transgender dancer Jin Xing has been suspended from Weibo. It seems this came after she criticised Putin for “being a maniac Russian man who vows to destroy the world if he can’t continue being the president,” according to outlets including Apple Daily.

Censors also removed a post from the WeChat blog 同时hxotnongd (archived here as a PDF) that shared eyewitness accounts of anti-war protests in St. Petersburg, including graffiti reading “ADOLF PUTIN”; resources on how to help Ukranians; and images of people burning their Russian passports. The post also included an editors’ note that condemned the war, which CDT has translated in part below:

As internationalists, we resolutely condemn war. We stand against both the imperialist invasion by Russia and the unchecked expansion of NATO. We support not the Ukrainian government, but the Ukrainian people’s right to self-determination without interference—they need neither Russia’s “protection” nor NATO’s “salvation.” The people have a will of their own. Hope for peace does not rest on “fighting like with like,” but on a cross-border antiwar movement that stands against Putin and NATO alike. [Chinese]

Given the critical focus on Russia elsewhere in the post, and its intensity, these jabs at NATO may have been included at least partly in an effort to avoid censorship. The post was accompanied by a dramatic graphic titled “fuck off, bullies” in Chinese, “no to war” in Russian, and “fuck war” in English: 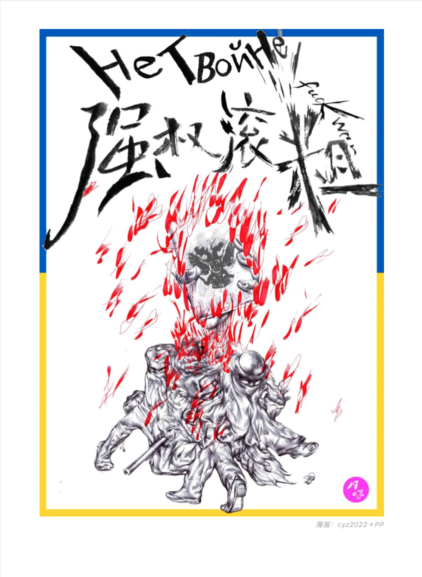 An open letter signed by five prominent historians—Sun Jiang of Nanjing University, Wang Lixin of Peking University, Xu Guoqi of the University of Hong Kong, Zhong Weimin of Tsinghua University, and Chen Yan of Fudan University—was perhaps an even more dramatic expression of anti-war sentiment in China. The letter was censored on WeChat soon after its publication. American historian Jeffrey Wasserstrom told The Guardian that “Sometimes the risks involved [in writing open letters]  are small but at other points it is truly daring to engage in this time-honored practice.” CDT preserved the letter and translated an excerpt in which the authors appealed to the historical consciousness of the Chinese people:

Our nation was once ravaged by wars: families were destroyed, people starved to death, and we ceded lands and paid reparations […] These sufferings and humiliations have forged our historical consciousness, and we share the pain of the Ukrainian people.

[…] We strongly urge the Russian government and President Putin to stop the war and resolve this conflict through negotiation. Use of force will not only destroy the progress of civilization and the principle of international justice, but also bring enormous shame and catastrophe upon the Russian people.

The desire for peace begins in our hearts. We stand against an unjust war. [Chinese]

Some similar sentiments were expressed in comments from Chinese social media translated by CDT last week.

A very few Chinese citizens took to the street in protest. Online, images circulated of a one-man protest in front of Chongqing’s People’s Liberation Monument:

More protests took place in Hangzhou, on the Shanghai subway, and on Lion Rock in Hong Kong:

At Vice News, Viola Zhou interviewed a student who engaged in a solitary anti-war protest in Hangzhou, in which he persisted even after being pulled in by police for questioning:

One activist, 24-year-old student Hiko, said he brought a banner that read “Bullets have no turning back, but you can put down your guns” to a crowded shopping district in the eastern city of Hangzhou, hoping to remind people of the cruelty of war.

From a public square, he was immediately taken into a police station on Saturday for questioning. But after being released, he managed to find a quieter corner to display the banner, Hiko told VICE World News, requesting the use of an alias to avoid further retaliation from the police.

[…] The responses were surprisingly friendly, Hiko said. Curious onlookers came to ask if he was Ukrainian. Several people gave him hugs, and some others told him to “add oil”—keep it up. Two women wanted to join his silent protest, but Hiko rejected them, worried it might draw police attention, he said. [Source]

Chinese censors also targeted reports on anti-war protests outside of China. A translation of an anti-war petition signed by over 2,000 Russian scientists and science reporters was censored on WeChat, even though the content was only a list of names. A report by Chinese outlet Jieman News documenting global protests by the Ukrainian diaspora was also censored on Wechat. Videos documenting protests in St. Petersburg, Russia—one of 48 Russian cities in which protests have been held, and more than 2000 people arrested—were also taken down from the popular aggregator application Toutiao, a subsidiary of ByteDance. Not all foreign protests are subject to such stringent censorship. Last year, the Communist Youth League, China Central Television, and Global Times all shared memes and commentary reveling in the January 6th Capitol riots in Washington, D.C.

Two days ago, I shared a post of me attending a protest against #Putin on #Weibo, China’s Twitter equivalent, and it immediately went viral. After it got 3.4 million views, it was censored. Most comments were from “little pinks”, but the majority supported #Ukraine with likes! pic.twitter.com/okBiR5XeYj

The anti-war sentiment expressed on Weibo inspired Global Times to publish an essay on public diplomacy, “cognitive warfare,” and “accelerationism” written by Sun Jiashan, a researcher at the Chinese National Academy of Arts. The essay argued that hostile forces, especially Taiwanese and Hong Kong “separatists,” are successfully using the Ukraine crisis to push accelerationism:

In this sense, the fact that the hashtag #UkraineIssuesStatement [#乌克兰在微博发声明#] shot to number one on the February 22 Weibo trending topics list is not only not an exception to the rule, but will become the basic modus operandi in the future. The diplomatic experience accumulated by the U.S., the U.K., and other Western countries during the Cold War ordains that they will never cede the key battlefield of extracurricular (i.e. non-governmental) public diplomacy, and that they will try to influence, steer and seduce online communities where young people gather, such as Weibo and Bilibili, in order to manipulate Chinese public opinion and public sentiment, and to satisfy the national interests that lie behind their governmental and public diplomacy. This will become the new normal.

[…] A more complex contemporary challenge is that the forces and groups engaging in public diplomacy in these virtual spaces are not just government agencies or entities. Taking the U.S. as an example, many of its professional lobbying groups are also highly skilled players in public diplomacy. Sometimes these professional lobbying groups represent U.S. national interests; sometimes they represent the goals of a certain political party or industry group; at other times, they represent the [narrower] interests of certain capitalist oligarchs or multinational corporations. For example, do they work for the interests of the old established east-coast arms manufacturers, or for the new platform-based west-coast Internet companies? Do they work to advance the interests of traditional Hollywood, or the interests of emerging streaming platforms such as Netflix? […] Obviously, there are various distinctions within the realm of public opinion and public sentiment that need to be clarified. Of course, the way these professional lobbying groups operate in online communities where young people gather, such as Weibo and Bilibili, is similar to the way they operate within the U.S.—that is, in a relatively covert fashion, without directly revealing their affiliations or intentions. But the current series of public opinion ops related to the situation in Ukraine offers ample proof of their malign intent and purpose. This not only illustrates the fundamental landscape of contemporary public diplomacy, it also demonstrates that a crucial new variable has emerged in China’s domestic Internet ecosystem.

[…] Because contemporary public diplomacy greatly overlaps with “cognitive warfare,” it is at its core a new form of contemporary warfare, which has been amply demonstrated by the Ukraine situation. Some people surmise that clandestine “Taiwan separatists,” “Hong Kong separatists” and other forces are the ones making waves in public sentiment and public discourse on the Ukraine situation.

[…] At the same time, we must defend national interests in the realm of “cognitive warfare”—which overlaps to a high degree with public diplomacy—and must take particular care not to be influenced by “accelerationist” ideological tactics that employ “deep fakes.” Time and again, they have attempted to whip up radical sentiments and ideological trends in China in order to defame China’s image on the international stage. This new ideological strategy is already having an effect, necessitating that we remain vigilant and self-critical. [Chinese]

With translations by Cindy Carter and Yakexi.