Following the deadly bus crash in Guizhou that killed 27 people, injured 20, and triggered fierce debate about China’s zero-COVID policy, two performance artists in Hebei successfully opted out of mandatory testing requirements after a three-day protest, achieving a rare concession from the local government.

Hebei’s mandatory weekly testing was briefly suspended in July before being reinstated earlier this month. Last week, two residents of a village in Zhangjiakou, Hebei province, were evicted from their home after refusing to participate in a mandatory weekly COVID test. They took to Weibo, using the account @大北和入阁 to document their lives in a makeshift shelter outside the village, but their posts were quickly taken down.

According to one of the evicted residents (referred to as “Ruge,” a pseudonym), a group of pandemic workers barged into their home on September 15, threatening to cut off water and electricity unless they complied with testing mandates. WeChat blogger 鸡蛋bot (ID: gh_abf7ee622e57), who documents pandemic prevention and control measures in different parts of China, shared an account of the two residents’ plight:

The next day, Ruge and Ruge’s roommate tried to move to a different village, but they were prevented from entering it. They then tried to return to Taipingbao Village, but were likewise barred at the village entrance.

“We have been evicted from the village. Now we are living in a tent two hundred meters from the village entrance: two humans, a cat, and a dog,” Ruge wrote on Weibo on the night of September 16.

Ruge’s roommate said that the day marked the beginning of his performance art piece “Life on the Street after Being Evicted by the Village Committee for Refusing to Participate in Weekly COVID Tests.”

“I will continue my performance art by sleeping on the street outside the village in order to voice my dissent against routinized COVID testing policies,” he wrote on WeChat Moments. [Chinese]

The Weibo posts quoted above are no longer available online, but were archived by CDT Chinese. On September 18, Weibo user @wstdq_its shared an update about the two residents:

Several screenshots from the artists’ WeChat Moments show a makeshift shelter adorned with a sign that reads: “Home of Regular Folks.” The sign included drawings that appear to depict scenes from their eviction, along with a COVID testing kit. 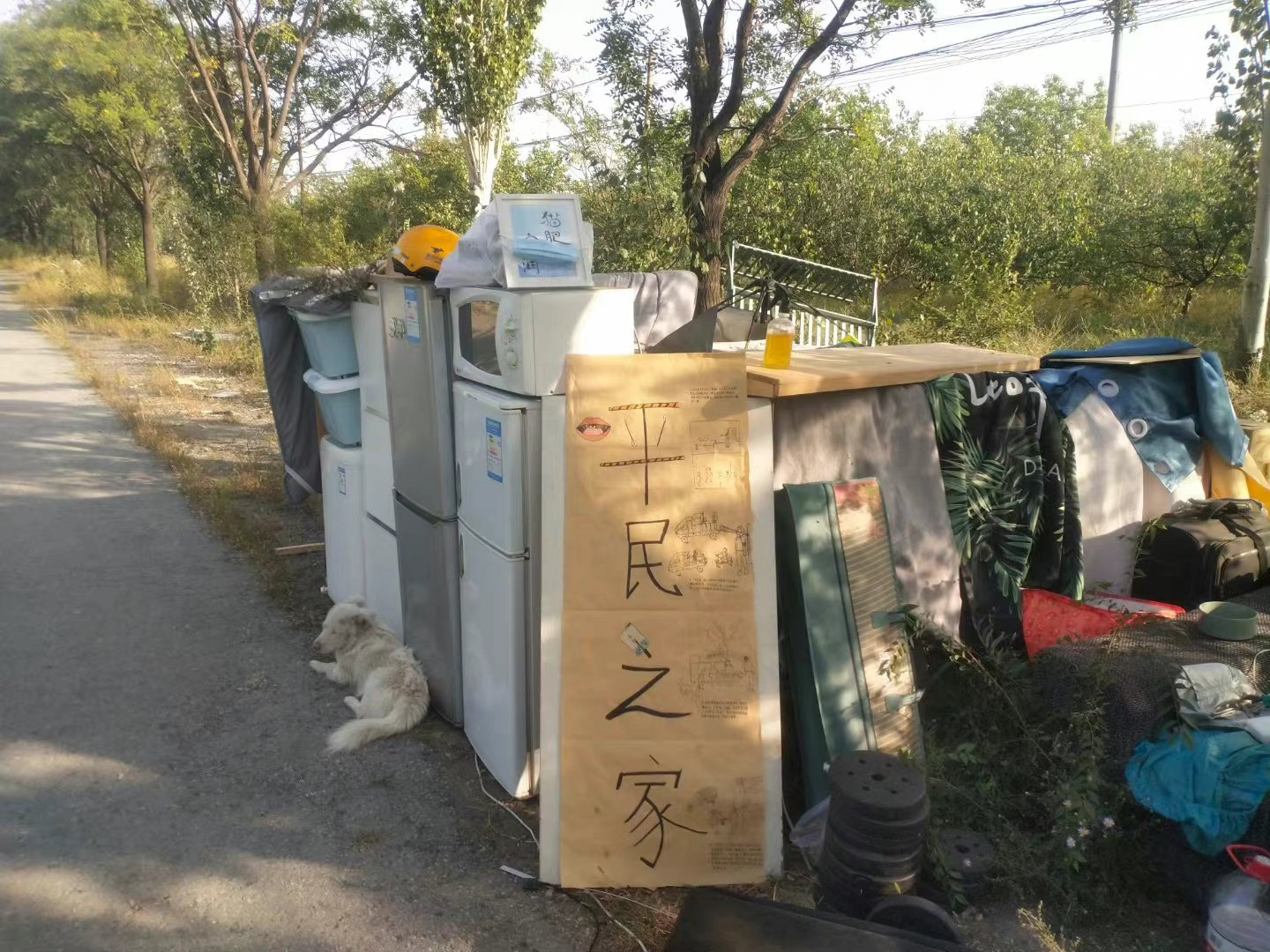 In another statement posted to WeChat, the artists said they had reached an agreement with the local government that allowed them to opt out of mandatory testing. They said they had moved into a new home, and thanked their supporters.

CDT Chinese has archived screenshots and comments from the original Weibo post, which is no longer available.

Residents in other parts of China have also used performance art to vent their anger at prolonged pandemic measures. In August, graffiti voicing dissent and calling for freedom appeared on multiple COVID testing booths in Beijing, a rare sight in a city under persistently tight political control. It remains unclear if authorities have identified the graffitist responsible. The now-deleted photos of the protests are archived on CDT Chinese.

During the lockdown of Shanghai in April, protesters put up banners denouncing the draconian measure and the strict media censorship surrounding it. A now-deleted Weibo post archived on CDT Chinese claimed that the protesters were taken away for questioning by police. Aside from scrubbing related images and posts off of social media, the authorities remained silent about the protest.

Last November, a young man wearing a face mask over his eyes locked himself in a cage on the campus of Beijing Film Academy, with a sign atop the cage that translates as: “Don’t leave the cage unless strictly necessary,” an apparent reference to China’s pandemic measures. Social media posts identified the young man as a student protesting against campus lockdown.

In addition to offline actions, people have raced against censors to engage in performance art online. For three years, students in China have found themselves at the whim of pandemic policies, with some having trouble accessing food and medication during campus lockdowns. In April, a Tongji University student cursed the school administration during a virtual town hall after his questions about lockdown were ignored. He then shared his screen with an angry message typed in red and blue characters, which quickly inspired memes that were shared widely on Weibo.

Music is another form of art used to protest pandemic policies. A music video titled “Voices of the People” appeared online in late April, featuring a group of violinists playing “Do You Hear the People Sing.” The famous song from the musical Les Misérables has been adopted by people in Mainland China and Hong Kong as an expression of dissent on several occasions, leading to its removal from China’s music streaming platforms in 2019. A segment of the “Voices of the People” video featured a red-and-blue filter, likely paying tribute to the collective action inspired by Tongji students a few days earlier.