Right after the adoption of a property law that guarantees citizens the right to own private property, this story became the most dramatic news on China’s Internet. Sina.com, China’s largest Internet portal, offered money award for digital images and videos that catches the development of the event. Mop.com, one of the most popular online forums runs real time monitoring page. What is it about? Please read following post from Peering Into The Interior blog:

This is a follow up on my previous posts with regards to “China’s most incredible holdout“, where a housing dispute led to the developer digging a moat around someone’s house who refused to move. This post is the translation of an interview with the owner of this “nailhouse” on an island, 40 year old Mrs. Wuping.

According to the interview, all Mrs. Wuping wanted was a space of comparable footage in the new building but the developer just wanted to give her a small sum of money. The local press was also forbidden to report on the story and the developer worked with the local government and courts to coerce Mrs. Wuping.

In this long interview you get an inside look into the local politics of relocation and the kind of difficulties people face if they chose to fight the developer. [Full Text]


Also from the Peering Into The Interior blog:

It seems in light of all the media coverage of the holdout or nailhouse in Chongqing, the owners have taken drastic measures and plan to stake it out in their house even though local courts have ruled that they must leave the premises by the 23rd. The couple who own the house are demanding that they be given comparable square footage in the new building, but the developer will only agree upon a small monetary compensation. The husband of Mrs. Wuping, whose media interview I just translated, has stationed himself on the island and has stated: “If anyone dares to come up I’ll beat them back down!” The 54 year old Yang Wuping also happens to be a martial arts champion. This was after Mrs. Wuping herself said you need to be patient and “can’t go around speaking carelessly.”

In addition Nanfang Metropolis Weekly ran an editorial saying that the nailhouse in Chongqing could be the first real test of China’s new property law. 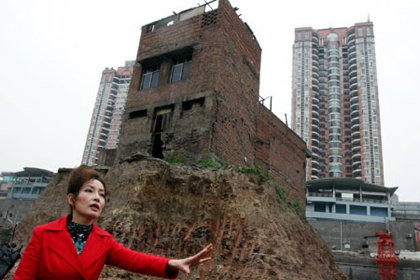 “Among the residents moving, I am the largest private property owner, furthermore you can basically say I am the only one who has complete papers, such as a property rights land right certificates, they both clearly indicated that it is a building zoned for business. At that time I had just finished renovations, and they (the developer) said they had to tear everything down and people had to be relocated, as a result this was really damaging for us. According to my property right certificate, I am clearly in ownership of 219 square meters, so for this use it should be returned to me.” – Wu Ping. Transcript is from Danwei blog.

Netease, one of the largest Internet portals in China, also has a special feature section for this story. (UPDATE: the feature page was deleted on March 23, 2007)

“The legal dilemma of a nailhouse” is a good background article (in Chinese) about role of government and developers in Chinese city construction projects.