Have China Scholars All Been Bought? – Carsten A. Holz 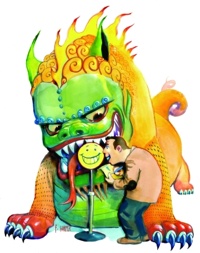 Academics who study China, which includes the author, habitually please the Chinese Communist Party, sometimes consciously, and often unconsciously. Our incentives are to conform, and we do so in numerous ways: through the research questions we ask or don’t ask, through the facts we report or ignore, through our use of language, and through what and how we teach.

Foreign academics must cooperate with academics in China to collect data and co-author research. Surveys are conducted in a manner that is acceptable to the Party, and their content is limited to politically acceptable questions. For academics in China, such choices come naturally. The Western side plays along.

China researchers are equally constrained in their solo research. Some Western China scholars have relatives in China. Others own apartments there. Those China scholars whose mother tongue is not Chinese have studied the language for years and have built their careers on this large and nontransferable investment. We benefit from our connections in China to obtain information and insights, and we protect these connections. Everybody is happy, Western readers for the up-to-date view from academia, we ourselves for prospering in our jobs, and the Party for getting us to do its advertising. China is fairly unique in that the incentives for academics all go one way: One does not upset the Party.

The Party’s”or, the mafia’s”terminology pervades our writing and teaching. We do not ask if the Chinese Communist Party is communist, the People’s Congresses are congresses of the people, the People’s Liberation Army is liberating or suppressing the people, or if the judges are not all appointed by the Party and answer to the Party. We say “Tiananmen incident,” in conformance with Party terminology, but called it “Tiananmen massacre” right after the 1989 Tiananmen massacre, when “incident” would have made us look too submissive to the Party. [Full Text]


Mr. Holz is an economist and professor in the social science division of the Hong Kong University of Science and Technology.