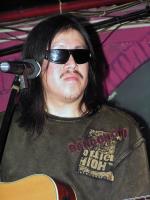 Zhou Yunpeng 周云蓬, 38, is a poet and folk singer based in Beijing. He went blind when he was nine. His last image of the colored world was the elephant in a zoo playing harmonica. This became an inspiration for him to write songs and sing later in his life. He likes to describe pure beautiful nature like a paradise, but he often reminds readers of the coldness of the external world and the struggle within a man’s heart. His language floats like water, his voice is rich and calm. The song below reflects several tragic news events. The helpless and angry tone represents a powerful social and cultural critique from the compassionate artist. Listen here. Music from Sogou, Lyrics translated by CDT:

Don’t be a child of Karamay, you would burn your skin and make a mother’s heart ache

Don’t be a child of Shalan town, you wouldn’t fall asleep under the inky black water

Don’t be a child of Chengdu parents, a drug addicted mother doesn’t go home for seven days and nights

Don’t be a child of Henan parents, AIDS in the blood laughs out loud

Don’t be a child of Shanxi parents, your father would become a basket of coal and you would never see him again

Don’t be a child of Chinese, when they starve they would eat you

They’re worse than the old goat in the wilderness, whose eyes might become aggressive to protect their little ones

Don’t be a child of Chinese, the parents are all too weak

To prove their hearts are as hard as iron and stone, when death is imminent, they save their leaders first.

Another song by Zhou, called Empty Cup, goes like this:

Another music video based on Zhou’s music and story of missing children of Shanxi brick kiln.