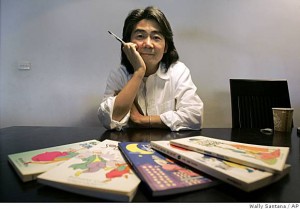 Chu Teh-yung or Ronald Chu, a cartoonist from Taiwan, is getting recognition in mainland China with a new museum built in his honor, despite the tensions between Taiwan and China. From The Yomiuri Shimbun:

Late last month, the city of Hangzhou in eastern China signed a contract with Chu Teh-yung to build a museum celebrating his accomplishments. The ultramodern structure, scheduled to open in 2010, is to be the centerpiece of a sprawling animation complex that will also include artist workshops and luxury hotels.

His success reflects two shifts: a narrowing social gap between the mainland and wealthier Taiwan, as Chinese move up the economic ladder, and Beijing’s gradual easing of limits on cultural expression.

The 49-year-old cartoonist also steers clear of political themes. That’s somewhat unusual in Taiwan, which is known for its hotly contested, even divisive politics. But it’s a winning approach in mainland China, where the one-party, authoritarian government brooks little dissent.