Despite the blocking of Twitter, there are still a significant number of Chinese Twitterers who are both outspoken and informative. Here are some of examples of such tweets, translated by CDT. These tweets were all published in September, and are divided into two categories: informational and commentary:

@daxa: Li Rui: Currently the film “Founding of a Republic” is showing in Beijing. The movie is all about praising Mao Zedong. Let’s not even get into how this film distorts historical facts and turns black into white. I only ask one question: Of the several hundred representatives of the new CPPCC, how many of them died normally? Can the director answer this? Does he dare to answer this? 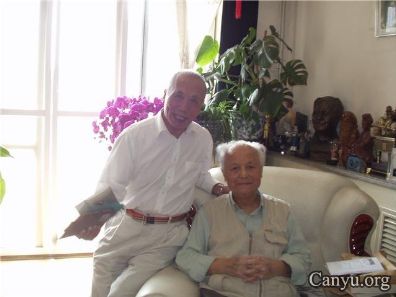 [CDT: Li Rui, 93, is former secretary of Mao Zedong. Tie Liu, a friend of Li Rui, reported that Li said this quote when Tie visited him on September 15 (Please see the photo above.)] 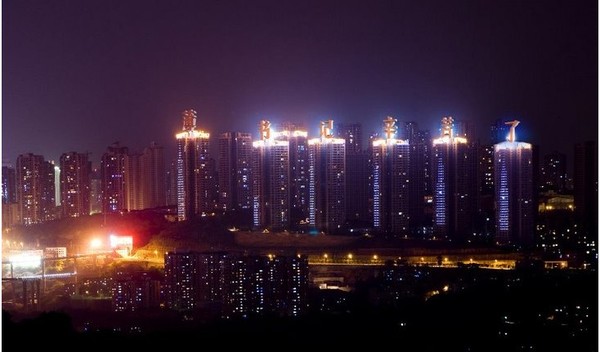 [CDT: In the photo,- a real picture, not photoshopped – the characters on top of the buildings read “Secretary Bo works hard!” The photo was taken at Jiubin Road (九滨路), Chongqin, posted at http://www.kdnet.net on September 21, 2009. Bo Xilai is the Party secretary of Chongqing. “The Comrades/Commander work(s) hard!” is a standard greeting during PLA military parades.]

@anonymous: Latest directions from the Ministry of Truth: Strictly forbid interviews and reporting details of training for the National Day celebration without approval [by the Central Propaganda Department, aka “Ministry of Truth“]

@anonymous: Due to the need to protect secrets, all PLA officers and soldiers [in the National Day parade] must hand in their cell phones before they enter the military parade village. The leaders of each [parade] block will be provided a phone by the command center of the parade after they move into the village.

@anonymous: One must maintain high political responsibility to carry out the work of secure broadcasting and maintaining stability through public opinion (舆论维稳) during the 60th anniversary celebration period. The task has to be specific, systematically managing people, procedurally managing tasks, giving each responsibility to corresponding individuals, and holding each one strictly accountable. From now on, launch the emergency mechanisms of news propaganda and secure broadcasting, to make sure the National Day propaganda and broadcasting is smooth and orderly. – above are minutes from Broadcasting and Television department meetings. [Instructions from the “Ministry of Truth”]

@anonymous: Those works in the broadcasting and television system must strengthen the management of key departments such as broadcasting studios, intensify the level of technological trouble-shooting, ensure that there will be no broadcasting accidents from the cable trunk, satellites, front-end studios, or broadcasting studios. Top leaders, responsible managers, news directors, producers, directors of broadcasting safety must all turn on their cellphone twenty-four hours a day everyday. If anyone needs to go out, he/she must ask for permission from his/her superior ahead of time. [Instructions from the “Ministry of Truth”]

@anonymous: All media must follow the principle of positive propaganda as the main content. Strictly control the negative reports. Those reports which might produce negative social impact should all be banned. Strictly implement the system of controlling content from all three editorial levels. Strengthen news discipline. No playing up negative news online. Make sure there is no accident in guiding the public opinion. Strive for excellency in propaganda, forcefully report economic and social development achievements in the 60 years since the founding of the PRC. [Instructions from the “Ministry of Truth”]

@youthfilm : In issue 13 of the《Phoenix Weekly》this year, there are two pages torn out by human hands from almost all copies. Some copies were fortunately left complete. These two pages contained contents about the story in the Japanese media that there were 200,000 PLA soldiers permanently disabled during the early nuclear tests

@auntbear: A professor [of journalism and communications studies] told us two common sense rules in journalism: 1. Never touch any negative news about the PLA. 2. If you want to be established in your research, stay away from the topic of press freedom.

@wanghaoxuan: The political police told my mother: “Your son better leave the country. Our system is not suitable for the existence of people like your son.

@lianyue: The nation of the People’s Republic of China: China and nation are real. People and Republic have never been delivered. Objectively speaking, this brand is only half true.

@adingwang: From the fact that Hong Kong reporters have been beaten, one can prove backwards that Hong Kong is an inseparable part of the People’s Republic of China.

@blogtd: Hammers and Sickles can also kill people. Will they also be taken off the shelf during the National Day period?

@cuzhidaye: Instead of spending so much energy, why not outsource this to North Korea directly. [commenting on the rehearsal of the October 1st Parade]

[CDT: Referencing Mao Zedong’s announcement of the Founding of the PRC on Oct. 1st, 1949, in which he declared: “The Chinese people have now stood up!” The Chinese word for “stand up” (站立) and shiver (颤栗) are homonyms.]

@blogtd: It would be crazy to produce a prequel, “Founding of the Party” following “Founding of a Republic.” How could you explain to the people of our country if there were fewer than seventy million viewers?

@hecaitou: It does not matter if the cat is black or white, so long as it knows how to jump over the wall [Great Firewall], it is a good cat.

@shizhao: “Across the Great Firewall, we can reach every corner in the world.”

[CDT: referencing the first email sent from China on the Internet: “Across the Great Wall, we can reach every corner of the world.” ] 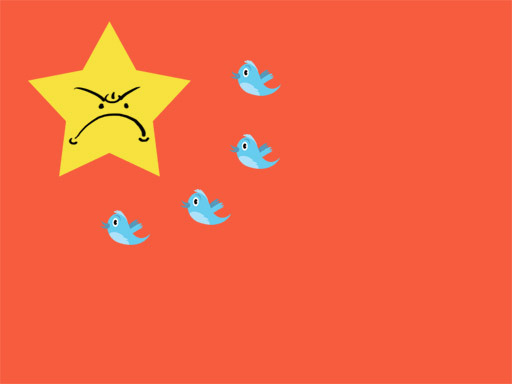