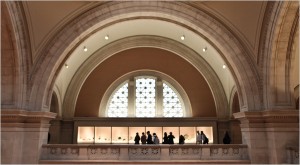 For the past two weeks, the delegation of Chinese cultural experts has swept through American institutions, seeking to reclaim items once ensconced at the Old Summer Palace in Beijing, which was one of the world’s most richly appointed imperial residences until British and French troops plundered it in 1860.

With a crew from China’s national broadcaster filming the visit, the Chinese fired off questions about the provenance of objects on display, and when it came to a collection of jade pieces, they requested documentation to show that the pieces had been acquired legally… Emboldened by newfound wealth, China has been on a noisy campaign to reclaim relics that disappeared during its so-called century of humiliation, the period between 1842 and 1945 when foreign powers subjugated China through military incursions and onerous treaties.

But the quest, fueled by national pride, has been quixotic, provoking fear at institutions overseas but in the end amounting to little more than a public relations show aimed at audiences back home… Although the Chinese public broadly supports recovering such items, a few critics have suggested that the campaign merely distracts from the continued destruction of historic buildings and archaeological sites across the country. A government survey released this month found that 23,600 registered relics had disappeared in recent years because of theft or illicit sales, while tens of thousands of culturally significant sites had been plowed under for development.