Latest Directives From the Ministry of Truth, September 3-17, 2010 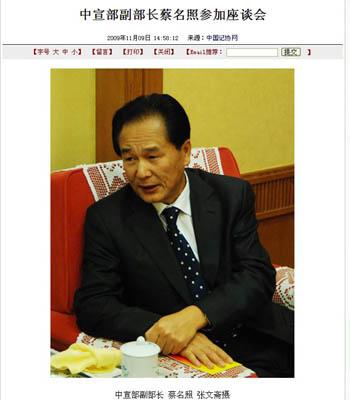 All media outlets must quickly withdraw from Yihuang county, Jiangxi province, and must not disturb the medical treatment of the injured parties

The self-immolation incident in Fuzhou, Jiangxi

The State Council Information Office notifies all major websites: all draft print and television reports on the self-immolation case in Yihuang county, Fuzhou city, Jiangxi must be abandoned.  [Ed. note: Three people in Yihuang lit themselves on fire in an attempt to prevent their homes from being demolished to make way for a planned bus station.]

All publishing houses are forbidden from publishing novels about official government circles.

Reports on the cell phone real name registration system must steadfastly maintain proper propagandizing and correctly  lead public opinion.  Only publish reports supporting the cell phone real name registration system.  Any report, opinion piece, or article that opposes the system, calls it into question, or senselessly nit-picks at its implementation cannot be published.  Such reports that have already been published absolutely must be deleted, creating powerful and positive public opinion on-line that supports the cell phone real name registration system.  We must strengthen management of opinion forums, news commentary spaces, blogs, and micro-blogs, resolutely deleting posts that oppose, call into question, or criticize the system.  It is not allowed to organize related online survey, and those that have already been initiated absolutely must be dismantled.  This sentiment must be communicated to the responsible parties of all websites, as well as editors of opinion forums and blogs.

This “Internet Affairs Bureau,” sent out very specific instructions to all large news websites daily, and often multiple times per day. Those instructions do not always mean that related contents are completely banned online, but they instruct websites to highlight or suppress certain type of opinions or information in a very detailed manner.
Chinese journalists and bloggers often refer to those instructions, as well as other type of censorship orders to media and websites, as “Directives from the Ministry of Truth.” TheMinistry of Truth (or Minitrue, in Newspeak) is one of the four ministries that govern Oceania in George Orwell’s novel Nineteen Eighty-Four. In the Chinese blogosphere, it is the online nickname for the Central Propaganda Department and generally speaking, all other subordinate propaganda agencies including Internet supervision departments.

News and Propaganda Resolutions for 2015

In Guizhou, Journalist Intimidation On Display