Quiz: How Well Do You Know Chinese Netizen-Speak?

China Digital Times has added many new entries to the Grass-Mud Horse Lexicon and updated a number of older entries.

Take this quiz to see how well you understand the colorful and constantly evolving language of China’s netizens. The answers all relate to new Grass-Mud Horse Lexicon entries as explained at the bottom of this page. Good luck!

1. What is the nickname given to the current Foreign Ministry spokesperson of China?
A. Stiff fish
B. The iron lady
C. The terminator
D. Madame Mao

2. What is the new nickname for Chongqing
A. The even-bigger apple
B. The tomato
C. Re-celebrate
D. Sicily of the Orient

3. It’s not rape if . . .
A. he was wearing a condom
B. she was unconscious
C. you both were unconscious
D. your father is Li Gang

4. The Foreign Ministry Spokesperson told foreign reporters who had attempted to cover the “Jasmine Revolution” in China that:
A. They could interview whomever they wanted as long as they agreed to only publish Xinhua news reports.
B. They should carefully consider how much they cared about getting visas to China in the future.
C. The law would not act as a shield to protect them
D. The protestors had ulterior motives and did not understand the actual situation.

5. There can be no new China without:
A. Lots and lots of fireworks
B. Forced demolitions
C. Finally burying Mao’s pickled corpse
D. Pandas

6. The Wall Street Journal dubbed which of the following, “China’s Weiner.”
A. Jon Huntsman
B. A tiger-suited David Wu
C. A famous type of sausage sold by vendors outside the Forbidden Palace
D. The “room opening bureau chief”

7. If you were to say, “I want to be a man” (我要作人) who would you be expressing a desire to emulate?
A. Jacky Chan
B. Mao Zedong
C. Liu Xiang
D. Tan Zuoren

8. If you pay enough money, which award might you be given?
A. The Confucius Award
B. The Backbone Award
C. The One-China Award
D. The Gentleman Hottest Cadre Award

10. Whose fault is it?
A. Foreigners who have eaten their fill and have nothing to do
B. Temporary workers
C. Babe Guo
D. Soy sauce committee members
E. Ministry of Bullying

11. Who is the mortal enemy of the poison jackal, and why?
A. The river crabs
B. The grass-mud horses
C. The water-weasel ape
D. The chirping pig
E. The yax lizard

12. If you wanted to refer to China without alerting the internet nanny, you would refer to it as:
A. The town of Jingde
B. The Celestial Empire
C. “Demolish it”
D. The mystical country

13. Why might you encounter difficulty if you searched for “love the future” on the internet.
A. Because the Party loves the past more than the future
B. Because of the recent ban on TV dramas based on time travel
C. Because of Ai Weiwei
D. Because it may encourage unauthorized reincarnation

14. If you wish to understand the motherland then . . .
A. Confucius said that you must first understand yourself
B. You must resolutely follow the path of socialism with Chinese characteristics and scientific development in pursuit of creating a harmonious society that adheres to the policy of the “seven happys and the four benevolents” being continually vigilant against capitalist roaders and their running dogs who would ignore our great leader Deng Xiaoping’s admonition that “some must get rich first” while implementing Mao Zedong thought in all levels of government
C. You have already gone down the path of breaking the nation’s laws
D. You must regularly read China Digital Times

15. Why is the following image controversial? 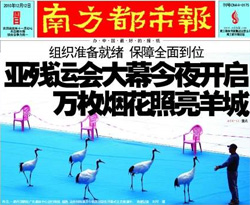 A. Because the cranes are arrayed in a military formation
B. Because of the subtle references to Nobel Laureate, Liu Xiaobo
C. Because the hot pink chairs and the baby blue-colored road totally clash
D. Because two of the cranes were injured in the making of this image

Answers:
1. (a) Stiff fish.
2. (b) Tomato
3. (c) If you were wearing a condom. Though if your father was Li Gang that would probably also help.
4. (c) The law is not a shield. However, it’s more than likely that at one point the protestors were also accused of being a small bunch of people with ulterior motives who did not understand the actual situation.
5. (b) Forced demolitions
6. (d) The “room-opening bureau chief”
7. (d) Tan Zuoren. Though, if you said Brother Chun, then she would understand
8. (b) The Backbone Award
9. (c) Egg fried rice. However, if Mao Anying were alive today, ditch oil, milk powder and poison rice could all be likely candidates.
10. All of the above:
– Foreigners who have eaten their fill and have nothing to do
– Temporary workers
– Babe Guo
– Soy sauce committee members
– Ministry of Bullying
11. (d) The chirping pig. Poison jackal sounds like “dictatorship” in Chinese, and “chirping pig” sounds like democracy. The other options are also mythical creatures with thinly veiled political meanings. See:
– river crab
– grass-mud horse
– watered-weasel ape
– Yax Lizard
12. All of the above. See:
– The town of Jingde
– The Celestial Empire
– Demolish it
– mystical country.
13. (c) Because of Ai Weiwei.
14. (c) According to Ai Weiwei, If you wish to understand the motherland then you have already gone down the path of breaking the nation’s laws.
15. (b) As explained by China Digital Times, the cover is in reference to Liu Xiaobo’s receiving the Nobel Peace Prize. (The word “crane” in Chinese sounds like “congratulations” and also sounds like “peace.” Liu Xiaobo’s empty chair in Oslo had crane embroidery. There are empty chairs in the image.) Well, whether you believe it or not, that’s up to you. But I do anyway.
16. (d) Screw you!

Thanks for taking this informative quiz. But before you thank us in return, remember to first give thanks to the country.

Here is a list of recently updated entries in the Grass-Mud Horse Lexicon:

* love the future
* Ministry of Bullying
* foreigners who have eaten their fill and have nothing better to do
* egg fried rice
* poison jackal
* it’s not rape if you wear a condom
* the law is not a shield
* Babe Guo
* “harmony” high-speed train
* the fabricator
* Muddled-Sh*t Times
* stiff fish
* soy sauce committee members
* The Backbone Award
* The town of Jingde
* temporary workers
* the “room-opening” bureau chief
* Without forced demolitions there can be no new China.
* jasmine
* Project Hope-less
* You understand
* shouting font
* screw you!
* Representative Rui
* The Screwing People Post
* vicious garlic, play with beans, and other similar phrases
* go with the flow
* shocking proposals
* surround and watch five cats
* slight erection
* My father is Li Gang
* I only serve the leaders
* I will be a person
* idle chit-chat
* tomato
* movie star
* Reposting is power
* Zhou self-castration
* make a tough decision
* in town
* this is a miracle
* Whether you believe it or not, it’s up to you, but I do anyway.

[CDT would like to thank our talented and witty translator, who wishes to remain anonymous, for his work putting this quiz together and translating the definitions.]