Netizen Voices: Hounded Out of House and Home 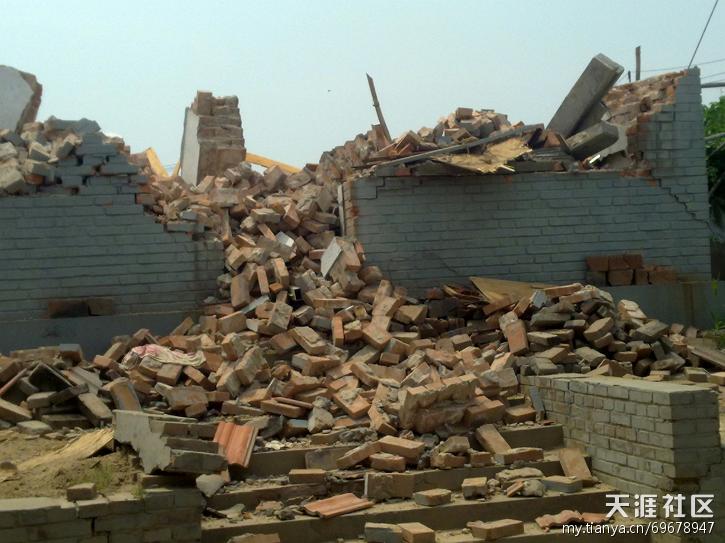 Weibo user Baipenyao2012, identifying himself as a Communist Party member, denounced the forced demolition of his home on June 9. According to Baipenyao2012, three families in Beijing’s Baipenyao neighborhood had their homes demolished, and in the struggle with the authorities one resident suffered brain hemorrhaging.

Baipenyao2012: I joined the Party in ’99. I’ve been a senior Party member for over ten years now. I have always obeyed the law, protected our motherland and championed our Party. Yesterday, my house was forcibly demolished, and I was beaten until my skull hemorrhaged. As a Party member, I now seek the support and attention of society at large.

Baipenyao2012: Our home was demolished, and still no one speaks out. Is this not the land of the Communist Party?

Netizens did not react to this man’s post with the sympathy usually afforded victims of forced demolitions. Because of his Party status, many answered responded with scorn. Still, a portion of netizens was somewhat sympathetic, saying no victim of forced demolition should be ridiculed.

Below are a selection of comments on Baipenyao2012’s posts. Read more at CDT Chinese. Translated by Little Bluegill.

CulturalRevolutionMemorial: This is an internal issue1 for you. It’s not something for us outsiders to get involved in.

JobsYi: This is a most unharmonious note to sound right before the 18th Plenary Session of the People’s Congress. I suspect you aren’t actually a Party member. If this unfolded as you say, you must treat it rationally and examine yourself for its cause. But understanding alone is not enough. Why didn’t you take the initiative to demolish your house before the authorities were forced to do it? Seeing as this issue has already caused problems, the only thing you can do now is turn yourself in and ask for disciplinary action on yourself.

ScribbleBaba: Party Oath: “I… am prepared at all times to sacrifice everything for the Party and for the people… I implore the organization to test me!”2 Your entire life and property all belong to the Party. Have you forgotten?

Wonphen: You have to demonstrate your advanced nature as a Party member, starting with the demolition of your home.  Such a lack of ideological awareness… You’re a senior Party member, alright.

LiTing—-2012: You’re a Party insider. You should report anything that happens to you to the Party itself. When you joined the Party you pledged your life to them. Right now the Party wants your crappy house. You’re just flapping your gums. Your Party spirit is weak, my dear.

HappyNoisy3Lives: What, you can’t make a little sacrifice for the Party-state?? Where’d your Party spirit go??

WangZuzhe: So, what you’re saying is that since you’re a Party member you shouldn’t be subjected to forced demolition, but it’s okay for everyone else? You don’t say a word when other folks’ homes are destroyed, but when it’s your turn, all of a sudden, you’re screaming, “I’m a Party member! I’m one of you guys!” Is this right?

WangXiaotian: What glorious comments. It looks like the Fifty Cent Party has lost a member.

SweetOrange: Looking at all these comments, I’m surprised to see that most people are ridiculing this man. Virtually no one is sympathetic. How would you feel if your house was forcibly demolished? Just because he’s a Party member, does it serve him right?

1 Chinese officials and press often accuse foreign countries who make a statement on Chinese human rights issues of interfering in “internal affairs.” Meeting with the Dalai Lama and issuing calls to redress the Tiananmen Massacre are frequently condemned by China in this way.
2 Full text of the Chinese Communist Party admission oath, from the constitution: “It is my will to join the Communist Party of China, uphold the Party’s program, observe the provisions of the Party Constitution, fulfill a Party member’s duties, carry out the Party’s decisions, strictly observe Party discipline, guard Party secrets, be loyal to the Party, work hard, fight for communism throughout my life, be ready at all times to sacrifice my all for the Party and the people, and never betray the Party.”