After Flood, Logic with Chinese Characteristics 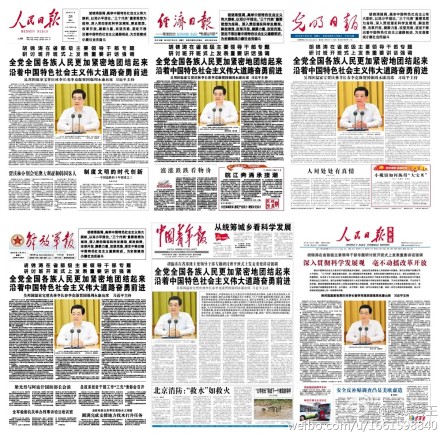 While netizens focus on the floods in Beijing, the state-run media has pointedly avoided the situation. The day after torrential rains crippled the capital, six newspapers ran the following headline from a speech by President Hu Jintao, as capturing in an image on Weibo:

The Whole Party and the People of Every Nationality in the Country Unite with Speed and Force, Forging Valiantly Down the Mighty Path of Socialism with Chinese Characteristics

Independent media are struggling to get the story out. Tweeter @MissXQ reports that eight pages of flood coverage have been censored from Southern Weekend. Weibo is being scrubbed, too. On Monday, over 7.4 million posts contained the terms “Beijing” and “torrential rain” (暴雨). Today, that number has dwindled to 50,000 and change. From the comments captured beyond the Great Firewall, it’s easy to see why the censors are so hard at work. There is great public anger of Beijing’s ageing sewer system, lack of emergency preparedness, and dearth of real news:

Every country has its corruption, every ruling body its endemic failures. But state-run media flogging the Colorado shooting hasn’t kept netizens from drawing comparisons to “China’s Katrina”:

QuietYukiWorld: China Can’t Fly Flag at Half Mast: On July 20, President Obama ordered all American flags flown at half mast for six days in mourning for the victims of the Colorado shooting. Some ask why China didn’t fly its flags at half mast after so many people died in the high-speed train crash. The brutal truth is that if we did that, we would also have to do the same for the Tianjin fire. And what about all the mining accidents? If we did it for everything, the flag would never be f**king raised!