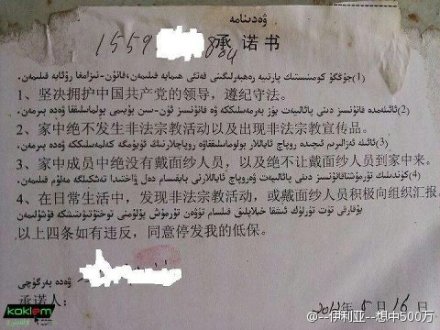 Weibo user Ilya, based in the provincial capital of Urumqi, recently posted a shocking image of a “commitment contract.” The signatory, whose name is whited out, agrees not to participate in or condone “illegal religious activities” in exchange for welfare services (低保). One of these “illegal” activities is the wearing of the veil:

–Ilya–Think500000: A commitment contract for Xinjiang Muslims… If the signatory violates the terms of the contract, (s)he will lose welfare support… Could you guys get any more ruthless?!

1. I will firmly support the CCP leaders and observe the law.

3. No one in my home will wear the veil. I will never allow persons wearing the veil to enter my home.

4. If I encounter illegal religious activities or persons wearing the veil in my daily life, I will actively report this to the Organization.

If I violate any of these four conditions, I agree to stop receiving welfare.

“According to the relevant laws, regulations and policies, results for ‘Xinjiang Muslim’ cannot be displayed.”

According to the State Department report, Xinjiang Social Management Committee Chair Nur Bekri is pushing for “innovative approaches to religious management” in this restive autonomous region. Authorities fear separatism as well as terrorism following a number of violent incidents in the region. In July 2009, riots flared in Urumqi after a clash in a Guangdong factory between Uyghur and Han Chinese workers. Then in February of this year, assailants killed 20 people in Yecheng, near the border with Pakistan. The victims included both Hans and Uyghurs. Bekri has alluded to possible ties between Uyghurs and terrorist organizations in Pakistan and Kazakhstan. But much of the ethnic and religious strife in Xinjiang can be attributed to economics. Uyghurs are often discriminated against in the hiring process and feel excluded from opportunity.

Via Over the Wall.