Destiny in the Flood Waters 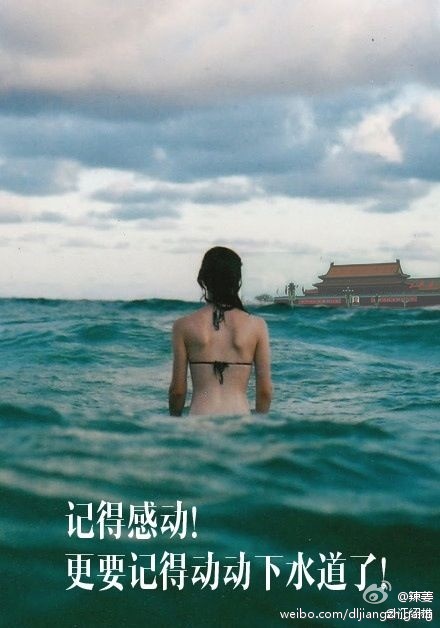 “Be moved! But more than that, move the sewers!”

Beijing’s floods are emblematic of government mismanagement. Chinese netizens are quick to make social critiques of disasters both great and small, and this most recent one has drawn out some dark, incisive jokes:

chuzhaoxin: There’s a city that poured huge sums of money into the Olympics, a nation’s capital. When it rained in this city, the streets flooded. People drowned in their cars. A policeman died of electric shock. This city is called Beijing. The country has sunk to this level. When the people can’t make decisions and the city officials have no shame, what can you do? The spontaneous rescue efforts of the people have thoroughly discredited those whose reputations were already bankrupt. This country’s hope lies not in a bureaucrat or an organization, but in every single individual.

WuyueSanren: Several events stand out from yesterday’s storm and its aftermath: The first is that the early warning system didn’t actually warn anyone early; the second, that the emergency response was slow to start; the third, that people who drove on the airport highway to pick up stranded passengers were charged tolls; the fourth, that neither the government nor public facilities opened their doors to those in need; the fifth, that drivers stuck in the middle of the road were fined for parking illegally. The only thing that functioned properly last night were the people of Beijing.

pufei: According to reports, the Beijing Sea and the Chengdu Sea are China’s only undisputed maritime territories. Fisherman, please go to work at ease. No need to worry about foreign warships giving you trouble.

pufei: In the Celestial Empire, every natural disaster is a prelude to an award ceremony.*

* Implies the Party will have a public back-patting for its flood relief efforts.

hnjhj: Under a once-in-forever government, be it a once-in-a-millenium earthquake or a once-in-a-century storm, the Chinese people can face it with grace.

mynamexu: Superficially, what the storm brought to light was the problems of the Beijing sewer system. But we need only hold this question up to related issues to discover that the “sewer” is a metaphor for the unraveling of the China rising myth. Should a social storm hit, this regime, which cares so much about saving face and nothing about saving its ass, will drown in a puddle of its own making.