Shifang: A Study in Contrasts 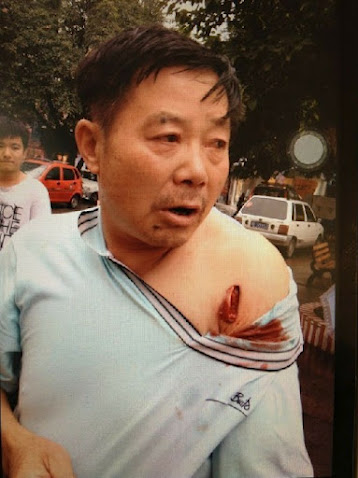 The turmoil in Shifang subsided on Wednesday as the local government canceled plans to build a copper molybdenum processing plant. Earlier this week, street protesters were greeted with tear gas and billy clubs. Unarmed residents were beaten and arrested. Now those detained have been released.

The events speak to the power of public scrutiny, facilitated by Weibo, to force political change in China. A police notice issued July 2 references the Law of the People’s Republic of China on Assemblies, enacted in October 1989 after the bloody crackdown on protesters in Tiananmen months earlier. That law requires all protests to be formally approved by “competent authorities five days prior to the date of the activity.” The website Over the Wall (墙外楼) posted the notice, along with scenes from the Shifang streets and a call to arms written by protesters:

1) Gathering or participating in assemblies or demonstrations of any kind which have not been approved by public security organs is strictly prohibited.

2) The use of the Internet, cell phone SMS messages or other means to organize or instigate illegal assemblies, protests or demonstrations of any kind is strictly prohibited.

4) Public security organs will, in accordance with the law, halt all those exhibiting extreme behavior while participating in illegal assemblies, protests or demonstrations. Those who refuse to obey orders will be removed or detained by force.

5) In firm accordance with the law, public security organs will stop, investigate and prosecute any persons who threaten public safety or damage social order by engaging in illegal activity while participating in illegal assemblies, protests or demonstrations.

6) Public security organs will, in accordance with the law, punish those who engage in criminal activities, including: participating in or taking responsibility for illegal assemblies, protests or demonstrations; gathering and disturbing social order; taking advantage of the situation to destroy property.

Save Shifang! All City Residents Unite!

People of Shifang, let’s save our city!! It already a “cancer town,” and they still want to build that molybdenum copper plant. We resolutely oppose this! This is our shared home, and it is our responsibility to protect it. Everyone is responsible for protecting the environment!!

Perhaps many people still do not know Shifang plans to build a molybdenum copper plant, and still more people do not know the damage this will cause. Once construction of the factory begins, it will already be too late. We do not want to leave Shifang! Shifang is the “Bright Pearl of Western Sichuan.” We cannot leave! Heavy metal pollution will cause us terrible harm.

Are there really that many Shifang residents who have the money to move to another province? We must come together and work to keep the molybdenum copper plant far from Shifang!

People of Shifang, rise up!!

But it isn’t protest alone that may be shifting power to the people. Like the backtracking forced on authorities after last year’s train crash in Wenzhou, the outcome of Shifang depended on social media. Without the video, photos and documents circulating online, this week’s protest may well have been fruitless.

The sheer volume of chatter about Shifang, and Han Han’s blog post on the subject, seem to have kept relevant terms unblocked from Weibo search results. Authorities may also not have anticipated a local issue going national. Whatever the reason, the Shifang incident has remained surprisingly uncensored. Weibo, clearly, is power. What remains to be seen is if the public will simply continue to pressure the government case by case, or if true reform will follow.