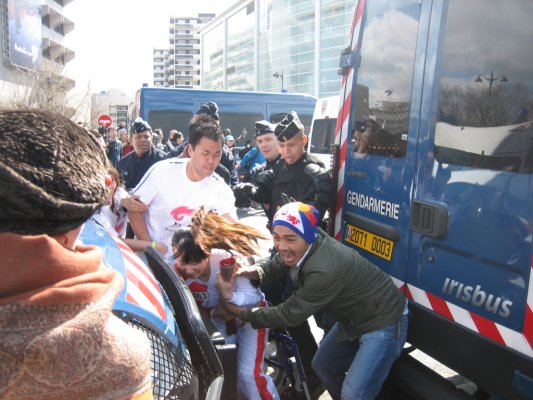 This week’s featured directive, issued in April 2008 by the Heilongjiang Province information portal, shows the power of “guidance” (引导) over protest in China. At that time, the Olympic torch relay was plagued at every stop by human rights groups and Tibet independence supporters. After a wheelchair-bound torchbearer was attacked in Paris, netizens called for a boycott of the French hypermarket Carrefour. “The biggest shareholder of Carrefour donated huge money to the Dalai Lama,” fumed the netizen demanding the boycott, “and even the French president has announced boycott of the Beijing Olympics.”

The directive below instructs provincial websites on how to direct online discussion of the boycott. Read the original Chinese here:

On-duty staff at the Internet propaganda office: Each website in every locality must adopt measures concerning netizens boycotting Carrefour and related propaganda management prompts to properly tamp down online discussion and prevent a loss of control from influencing domestic stability. Prepare your reports, guidance and management according to the following requirements:

(1) Give protection to the patriotic fervor of netizens who support the Olympics, who oppose “Tibet independence” and who denounce Western media’s distorted reporting and insults to China. Direct the discussion at the Dalai clique’s secessionist forces, as well as the vile material produced by CNN and a small number of other Western media.

(2) Comprehensively and nimbly guide netizen discussion of boycotting Carrefour and French products in a logical direction. Direct netizens’ patriotic fervor such that you fulfill your duties and the Olympics are successfully launched. Each website in every locality must organize commentaries to carry out guidance, but they should be limited in number and not stray in focus. After a related article is posted, please send the link to the domestic affairs work inbox of the Internet Research Center.

(4) Comments and posts calling for seizing this opportunity to incite demonstrations, marches, assemblies, “group walks,” “group shopping” and other group activity must be deleted without exception. Comments and posts which ceaselessly negate and criticize the patriotic fervor of netizens, echo or support foreign anti-Chinese forces, or which cause trouble, add oil to the fire, create conflict among netizens and oppose [the voices we are supporting] must be deleted without exception. All those in charge of information portals and the 13 city portal websites which have already been notified will execute these instructions. They will also conduct thorough searches of all Heilongjiang information portals and delete related information; they will together delete one post calling for boycotts and five related comments. (April 18, 2008)