Word of the Week: Maintain Stability 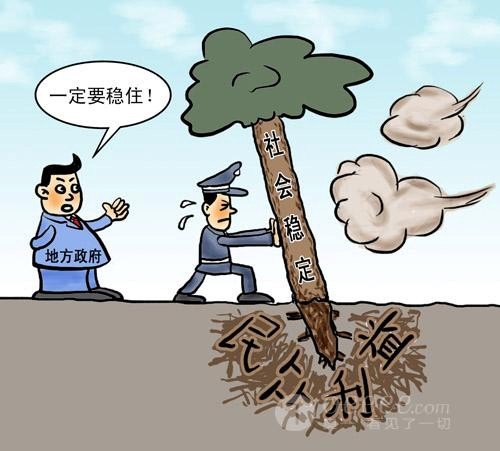 A local official admonishes the policeman, “It must be stabilized!” The roots of the tree of social stability are “the welfare of the people.”

Hand-in-hand with Hu Jintao’s policy to promote “a harmonious society” is an increasing focus on “maintaining stability.” According to the New York Times, the Chinese government budgeted US$111 billion for social stability maintenance in 2012, US$5 billion more than the military budget.

Netizens have their own take on stability maintenance. For example:

When Titanic was first shown on the mainland in 1998, the scene where a naked Rose let Jack sketch her was left alone. Then why was that scene deleted from 2012 screenings? The State Administration of Radio Film and Television (SARFT) has finally provided an explanation: “Considering the unique aspects of 3-D movies, we were concerned that when the movie is shown members of the audience would try to reach out and touch, which would result in unnecessary disputes with those seated in front of them. Given our concerns about maintaining stability, we have decided to delete this scene.”