Mo Yan Wants to Buy a House in Beijing. Can He? 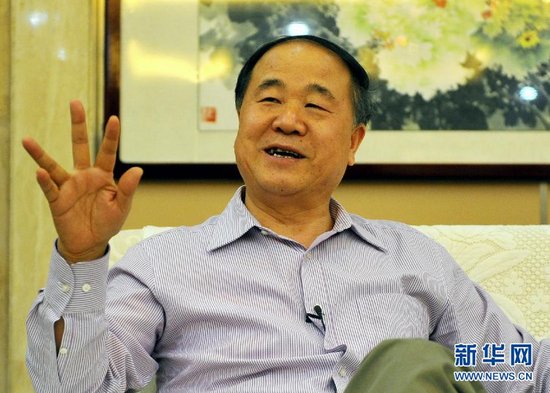 When asked by a Xinhua journalist what he would do with his prize money of RMB7.5 mil, Nobel winner Mo Yan replied:

I’m getting ready to buy a house in Beijing, a big house. But then I’ve been warned I won’t be able to get anything that big. A house is more than RMB50,000 per square meter. RMB 7.5 mil is 120-some square meters.

Netizens were stunned by the “magical realism” of such a huge sum of money meaning so little in the Beijing real estate market. Beijing real estate tycoon Pan Shiyi (@潘石屹) stoked the fires when he asked bluntly, “Does @MoYan have a Beijing hukou [household registration]? (@莫言 有北京户口吗？)” Without the proper hukou or proof that he has been paying city social security taxes for at least five years, Mo Yan has no legal route to home ownership in the capital. Such property-purchasing limitations (限购令), which began in Beijing in 2010, are in use nationwide.

Meanwhile, an investigation of Guangzhou City Management Commissar Cai Bin, who owns 21 homes, started last week. Property-purchasing limitations in Guangzhou, Beijing and many other cities restrict residents to one property per household. Compared to officials like Cai Bin, Mo Yan is “one of us,” just trying to make a living with his Nobel money.

Below are a selection of comments gathered by CDT Chinese:

DuguHoe: Has he been paying his social security taxes for five years?
独孤锄头：交满五年社保了吗？

Hikerjmc: The Chinese people are all struggling to win a Nobel.
健行者jmc：中国人民都在为获得诺奖而努力。

gbsoup: After you buy your house, you’ll still have to renovate it… And did you take the property management and parking fees into account?
口口烧炖： 买完房还得装修呢…物业费停车费留出来了么？

TriRoadSummer: If they don’t keep increasing the Nobel prize money, it will lose its appeal in China…
三角路的夏天： 诺贝尔奖金再不提高，在中国将会失去吸引力呀……

BeyondHeaven-CZX: It’s already a great mercy to live as a free man. Don’t forget where the previous laureate is living.
在天堂隔壁-CZX：给你自由身就是主隆恩了，别忘了前面一位住哪里•••

StarPicker010: Mo Yan is indeed one of us common people.
摘星手010:莫言果真是百姓自己人。

wujiandeng: Heh heh, the prize money seems big, but in fact is just worth an apartment.
南都阿登：呵呵，奖金咋看很多，细看就一套房

tjwjl: In China, a small-time official is worth more than a world-class writer.
王津来：在中国，一个世界级的作家，还不如一个小吏。

Learn more about Mo Yan, the Nobel and real estate from CDT.