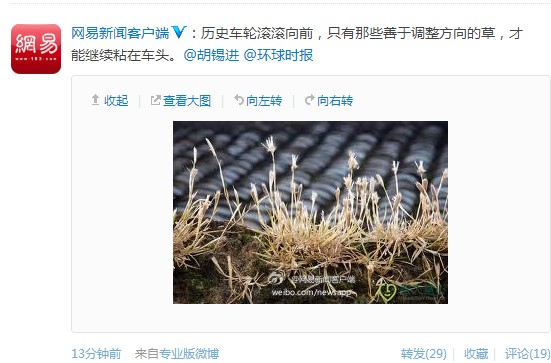 When Hu Xijin, chief editor of the government state-run Global Times, predicted Mo Yan would win the Nobel prize in literature last week, he warned the public to brace itself for the verdict, to “keep a ‘calm heart’ about it” and remember “whose ‘turn’ it is.”  Once Mo Yan won, Hu embraced the politicking of the prize, proclaiming that the West could not reject mainstream Chinese culture “for much longer.”

The online media platform NetEase took a veiled jab at Hu Xijin and his newspaper with an allusive Weibo post:

NetEaseNewsClient: The wheel of history rolls forward. Only the grass that is adept at adjusting its direction can keep sticking to the front of the car. @HuXijin @GlobalTimes

The grass alluded to in word and image is the annual fleabane, known as qiangtoucao (墙头草) or “wall-top grass” in Chinese. Qiangtoucao also means “fence-sitter,” someone who bends to the prevailing political or social winds to stay rooted.

This is a surprising post to come from a Chinese media company, but it is not without precedent. This May, the Beijing News left a cryptic apology on Weibo after publishing an editorial which accused the U.S. government of “scheming” to bring the lawyer Chen Guangcheng to its embassy. That post stayed live for nearly 24 hours before it vanished. It’s unclear how long the NetEase comment lasted, but it, too, has been wiped from Weibo.