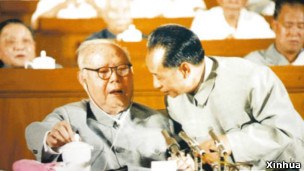 These directives, issued between November 1-3, are related to China’s upcoming leadership transition at the 18th Party Congress on Thursday.

State Council Information Office: All media must without exception not report or comment on the appearance of photos of Hu [Yaobang] and Zhao [Ziyang] on the 18th Party Congress news center. (November 2, 2012)

On November 1, a photo from the 12th Party Congress in 1982 appeared on the 18th Congress website picturing (clockwise from top right) Zhao Ziyang, Hu Yaobang, Ye Jianying and Deng Xiaoping [zh]. Hu’s death in April 1989 lead to the nationwide protests which were brutally suppressed on June 4. Zhao, who succeeded Hu as Party Secretary General in 1987, was purged for his support of the protesters. He died in 2005, ending 15 years of house arrest. The 1982 photo was removed from the site by November 4.

The Hong Kong paper Ming Pao published the “before” and “after” photos:

Mingpao: photo of Zhao Ziyang and Hu Yaobang exhibited in 18大’ News Centre has been replaced with a voting one. twitter.com/huanglisha/sta…

Central Propaganda Department: Without exception, do not produce interviews, reports or commentary on security work for the 18th Party Congress. (November 1, 2012)

State Council Information Office: Strictly adhere to Xinhua copy in reporting the matter of Su Zhanshu holding the post of secretary of the Central Committee Working Committee [concurrently with the post of director of the General Office of the Communist Party]. Do not use or link to any other sources. (November 2, 2012)

Su replaced Ling Jihua as director of the General Office in September, while Ling was demoted to head of the United Front Work Department. The power shift seems linked to the death of Ling’s son in a scandalous Ferrari crash in March.

Hu Deping, the son of Hu Yaobang, is reported to have recently met with Xi Jinping to discuss political and economic reforms.