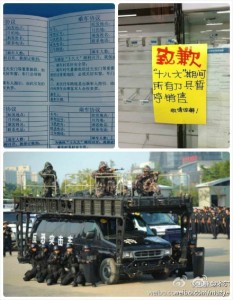 The yellow sign at top right reads, “Apologies: We will temporarily stop selling knives during the ‘18th Party Congress’ period.”

The 18th Party Congress has brought Beijing under lock-down, while cities far from the center have also felt the effects of heightened security during China’s leadership transition. CDT Chinese has amassed comments, cartoons, and images of “Sparta.” CDT English will continue to post translations of selected commentaries during the congress. Read more in the series at CDT Chinese, and learn about the developments of the congress from CDT English.

UnitedFamilyPharmacistJiLianmei: Anyone else out there who doesn’t pay attention to their gas meter? After work today, my car ran about two feet before puttering to a halt right in the middle of an intersection. Uncle Traffic Officer helped me push my car to the side of the road and pointed me towards a nearby gas station to buy a canister of gas. I listened to his advice and walked over two kilometers to the gas station. But when I got there, the attendant at the gas station said, “Who’d have the audacity sell you a loose container of gas before the 18th Party Congress?” Left with no other choice, I hailed a cab. Being a noble Beijing man, the cabby drove me back to my car, then helped me drag it all the way back to the gas station.

Mr.KongZhiyong: [Beijing Residents Forbidden to Release Pigeons] The Meetings open next week. In order to ensure security during The Meeting, Beijing residents are forbidden from releasing pigeons. According to the media, Beijing residents must keep pigeons locked in their cages during The Meeting. Pigeons must not be released and allowed to fly freely about. I reckon Beijing taxi passengers will be unable to freely roll down their windows as well.

BlackBoxChenLiaoyu: 1-8 Big, 1-8 Feel. Quite fitting. //@CatFoodCartoons: Security measures have increased significantly at the Hangzhou train station. Besides the normal set of security checks, a whole crew has just come over with metal detectors and has started feeling up all the passengers–just as we are waiting to board. Sigh, what’s it going to be like once the 18th Party Congress actually starts?

GaoXiaosong: Censorship of songs has been unprecedentedly harsh as of late. Songs broadcast by major TV stations must not contain inauspicious lyrics, including such words as “death” or “down.” I just witnessed one program get cut off right as someone sang “Love Even unto Death” [a popular love ballad by Taiwanese artist Shin]. All those in the media industry should be aware of this.

Kujes: I usually walk my daughter right up to the door of her classroom, but starting Monday, I’ll only be able to walk her to the gate of the school because “parents are forbidden from entering the school grounds.” As for the reason, anyone want to venture to guess? Of course, during this special time, the reason for odd occurrences of any sort is quite apparent. Uncle Security Guard need only to say one word: Sparta! 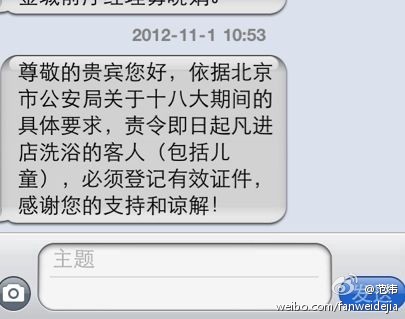 FanWei: [Urgent Notice: ID Now Needed in Imperial Capital Bathhouses–Children Included!] Greetings, esteemed patron. According to Beijing Public Security Bureau directives regarding the [18th Party Congress], all bathhouse patrons (including children) must present valid ID when checking in. Thank you for your support and understanding!

Mu’er: [18th Party Congress Security Measures Put People At Ease] With the 18th Party Congress about to begin, Beijing is mobilizing over 1.4 million security volunteers. Some stores are requiring customers to present ID in order to purchase remote-controlled toy planes. Some supermarkets have taken kitchen knives off the shelves. All activities that include the release of balloons have been prohibited. Internet reports say that those who wish to take a cab to Chang’an Avenue must fill out a form… Not only is security receiving unprecedented attention, but the minutest details are being taken care of. It sure puts people’s safety concerns to rest.

LiaoShenEveningPaper: [Starting Today, Out-of-Town Cars Entering Beijing Must Obtain a Pass] A reporter learned from the department of traffic police that from midnight November 1 through 24:00 hours on November 18, Beijing will enact provisional transportation measures on all out-of-town vehicles entering the city. The measures include the stipulation that all drivers of out-of-town passenger vehicles wishing to drive within the Fifth Ring Road (including driving on Fifth Ring Road) must obtain a pass. Passes will be valid for three days. Qilu Evening Paper.

Vista: [Beijing Requires 17 Bus Lines Passing Through Political Centers to Seal Bus Windows] The Beijing City Transportation Commission will enact special provisions effective during the 18th Party Congress. The provisions require that all transportation work units firmly establish a lofty sense of political responsibility and mission. The 110,000 transportation volunteers are encouraged to wear red armbands. Buses servicing any of the 17 routes that pass through political centers must enact effective measures to seal the bus windows. Guard sternly against such problems as the dissemination of pamphlets from bus windows. The Beijing City Transportation Commission. http://t.cn/zldnnh2

FanJianchuan: 12,000 Chengdu police go on the offensive; The 20 days of the 18th Party Congress War have kicked into gear. Last night, the call to war was rung throughout the province. And the spoils? In Wuhou District, a Lamborghini driver was fined for not displaying a license plate. In Chenghua District, a burglar was apprehended. In Jinniu District, a thief was caught stealing steel pipes. In Qingyang District, a computer thief was caught. In Quanyi District, a modified pistol was discovered in a car. In Pengzhou City, two dens where fake cigarettes were being made were destroyed. 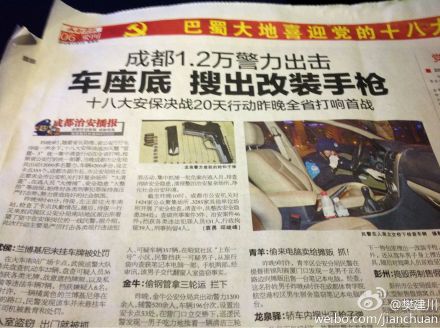 RememberCareer: As I was taking a cab to work just now, I was confused when the cabby took a detour. “The city put out a directive that forbids taxis from driving on Chang’an Avenue between East Fourth Ring Road to West Fourth Ring Road from November 1 through 20. In order to comply, taxicab drivers can refuse to take passengers or take detours without being considered in violation the rules,” he said. I was at once angry and speechless. Then he pointed to the car window and told me that all car window cranks had to be dismantled as well, and power lines were cut to electronic windows. I fell silent. 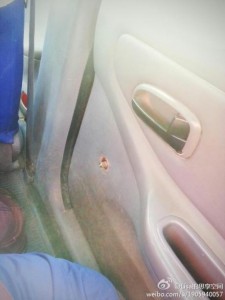 Window cranks have been removed from Beijing taxis.

LinChufang: When I was taking a cab home a bit ago, I asked the driver, “Is your company really requiring you to keep the windows closed?” He said yes. “Did they really make you take out the window cranks in the rear?” He said yes. “What if the windows were electric?” He said they can be locked from the front. “And what about driving through sensitive areas?” He said the door must be locked. “But who would know if you didn’t lock the doors?” He said there were people checking. It seems the online rumors were true. I guess I just don’t have much of an imagination. How naïve I am!

Lisa: This morning I was lucky enough to hail a cab in which I was able to see that the rumors I heard yesterday were true. It’s all about celebrating “Sparta.”

A man passes through security holding his copy of Little Li Flying Dagger, a popular martial arts series. At the other end, the “dagger” is gone from the book cover.

Guevara: [Knife-sliced Noodles] During the Yuan Dynasty [when China was under Mongol rule], in order to prevent the Han from uprising, it was decreed that every ten families would share one kitchen knife. One day, an old woman made dough for noodles and sent an old man to retrieve the shared knife. But the man discovered that someone else had already taken the knife. On his way home, the man found a thin piece of metal on the ground. The metal was too thin and soft to properly cut noodles, so the old woman had no choice but to stand next to the pot and cut one noodle at a time into it. And voila! Knife-sliced noodles were born. To this day, knives used to cut knife-sliced noodles are still sheets of metal. You don’t even need to present ID to buy one.