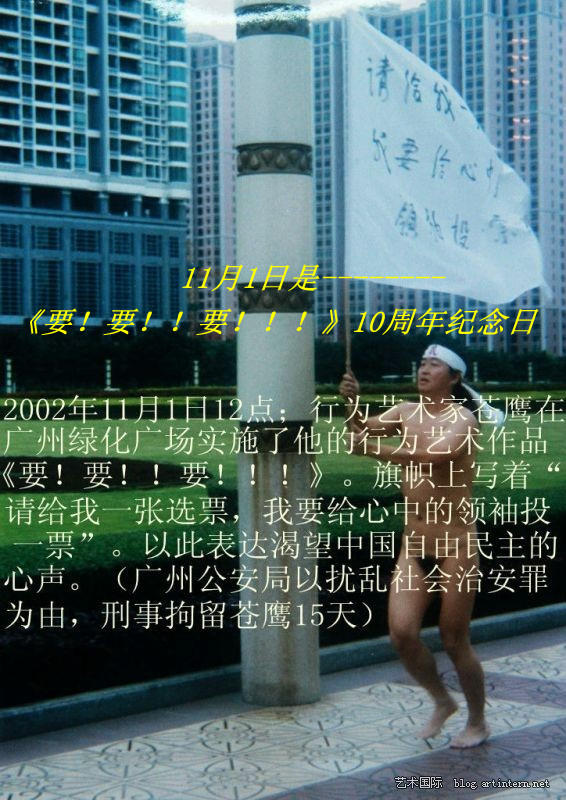 Guangdong artist He Guoqiang posted this blog entry on November 1, 2009, recalling his provocative performance art piece in honor of the opening of the 16th Party Congress in 2002. Photos from his performance reemerged online last month, as netizens drew parallels between the changing of the guard ten years ago and today.

He was detained for 15 days in 2002 after streaking through a public square in Guangzhou and waving a flag that called for elections. This has not deterred the Chengdu native, who continues to post images of his politically-charged paintings online [zh].

He was questioned by police on the evening of June 3 this year about paintings he had planned to unveil the next day, which they suspected would recall the the massacre of protesters in Tiananmen Square on June 4th, 1989. He told VOA this work was not the case, but that he had simply chosen a “sensitive” date [zh]. Neither the VOA report nor another from Chinese Human Rights Defenders [zh] specify whether He was able to show his paintings.

Parentheses mark three places in the blog post where text has been removed. It is unclear who deleted the text, or why. It is possible that He deliberately “left out” language.

Now that I mention it, it’s funny–just as I was about to start my performance that day, the bright, sunny weather suddenly turned dark, and an ill wind blew in. After my performance came to an end, I was apprehended by the police’s dog-c*nt security guards and taken to the police station, where I was interrogated to get to the root of my evil acts. I was ultimately sent to the Tianhe Detention Center, where I enjoyed 15 days of inhumane treatment.

The 21st century is the century of the Chinese people. And as a Chinese person, I used a kind of “nudity” to express my rejection of and opposition to the bare, utter lack of humanity. Yes, this does have a shade of tragedy to it. Are the Chinese people indeed people? My own answer to that question frequently has me wondering. (189 characters were deleted here.)

Via He Guoqiang’s blog, Eagle. Translation by Little Bluegill.

111: When spoken as a numeral, as in a phone number, one is often pronounced yāo. This sounds like the word “to want,” yào. Back.