Follow the latest news from the Two Sessions here. 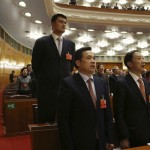 The opening ceremony for the first meeting of the 12th National Committee of the CPPCC in Beijing’s Great Hall of the People. Yao Ming is pictured singing the national anthem. (NetEase) 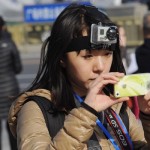 March 3, Beijing: A female journalist with a camera strapped to her head and one hanging around her neck uses her cell phone to report on the Two Sessions. (NetEase) 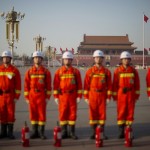 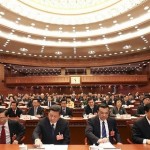 March 4: The presidium for the first session of the 12th NPC holds their first meeting in the Great Hall. Xi Jinping and others vote. 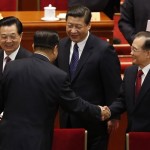 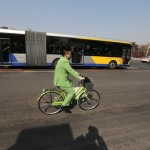 March 3: Chen Guangbiao, the eccentric billionaire, is attending the Two Sessions as a guest delegate. Chen rides his bicycle to the Great Hall to take part in the CPPCC opening ceremony. 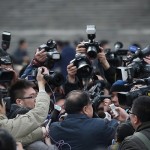 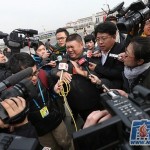 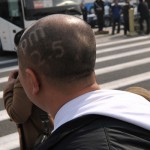 March 5, a journalist with “PM2.5” shaved into his hair shows up to conduct interviews at the Two Sessions. 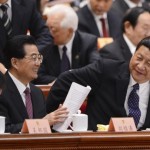 March 3: The first meeting of the National Committee of the 12th CPPCC kicks off in Beijing’s Great Hall. Hu Jintao and Xi Jinping preside over the meeting. 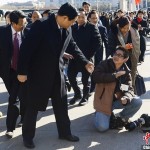 The afternoon of March 4, the first preparatory meeting of the 12th NPC is held. By the eastern gate of the Great Hall, photojournalist Liu Jian trips and falls while reporting for the China Youth Daily; Shaanxi Party Secretary Zhao Zhengyong extends a hand to help him up. (ChinaNews) 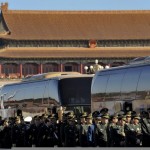 Early on the morning of March 4, the delegation of representatives from the People’s Liberation Army crosses Tiananmen Square to take part in the first preparatory meeting of the 12th NPC. (ChinaNews) 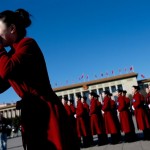