As of March 4, the following search terms are blocked on Sina Weibo (not including the “search for user” function). 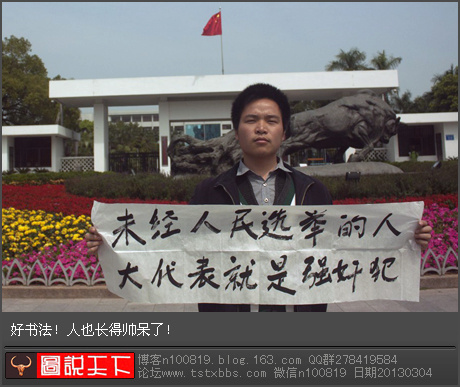 “Representation by unelected delegates is rape.”

National People’s Congress:
– sand c**t + Beijing (沙逼+北京): Beijing was battered by a sandstorm last week, earning a nickname that plays on the curse “stupid c**t” (傻逼 shǎ bī): “sand c**t” (沙逼 shā bī).
– Two Sessions + shock (两会+雷人): “Shocking” images from the National People’s Congress are making the rounds online. See these photo galleries (1, 2) from CDT Chinese [zh]. (Together with the People’s Consultative Congress, these annual gatherings are known as the “Two Sessions.”)
– Five Do-Nots (五不搞): Do not make a system in which multiple parties govern in turn; do not diversify guiding ideologies; do not “separate the three powers” and create a bicameral system; do not federalize; do not privatize.
– Three Above-Alls (三个至上): Service to the Party above all; the interests of the people above all; constitution and laws above all.
– movie star + take a curtain call (影帝+谢幕): After delivering his “government work report” yesterday, outgoing prime minister Wen Jiabao bowed three times and took a “curtain call” in response to applause. Exiled writer Yu Jie described Wen as a movie star in his 2010 book China’s Best Actor: Wen Jiabao.
– three bows (三鞠躬)
– movie star + wen (影帝+wen)
– Wen Jiabao + housing prices (温家宝+房价): People are grumbling about the 20% tax recently added to the sale of previously owned homes. A number of netizens attribute the ever-rising price of housing to the failure Wen’s policies over the past decade.

Other:
– defend freedom of the press (捍卫新闻自由)
– suppression of public opinion (舆论钳制)