AmazeNews: At the Mercy of “Brother Emperor”

Qiwen Lu (奇闻录, AmazeNews) gathers “news of the weird” from China. It was voted Best Blog in Chinese in Deutsche Welle’s 2013 BOBS awards.

The AmazeNews story below was first posted on May 8 as part of the ongoing series Scenes from the Golden Age (盛世一景). CDT Chinese carries all AmazeNews posts (here). 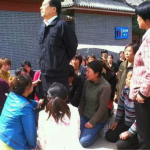 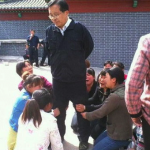 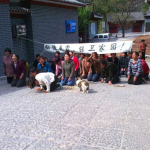 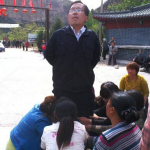 On April 28, under the guise of a conference, the township government of Beiye, Pingshan County, Hebei Province arrested the chief and secretary of Mimishui Village. On April 29, a group of women from the village kneeled on the ground to beg Zhang Dongli for the release of the arrested village officials.

In the images, a group of female villagers are shown kneeling in front of Zhang. Some of them tug at his legs while they beg for the release of the detained officials. But Zhang Dongli is unfazed. His face remains expressionless as he stands with his hands behind his back and his nose in the air.

According to Radio Free Asia [zh], the local government sold the villagers’ land over ten years ago to someone surnamed Su to build a sightseeing attraction. Since then, many villagers’ homes have been forcibly demolished.

Images of stoney-faced Zhang began to circulate on Weibo around May 6. Netizens have dubbed him “Brother Emperor” (皇帝哥). While a Weibo search for “Brother Emperor” only returns 750 results as of 4:15 p.m. EST, weibo from @拍客视线 and @获鹿县令 have together been reposted over 6500 times.