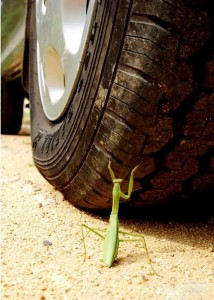 “Don’t you know about the praying mantis that waved its arms angrily in front of an approaching carriage,” warned the philosopher Zhuangzi, “unaware that they were incapable of stopping it? Such was the high opinion it had of its talents” (Burton Watson, trans.). Images of the angry mantis facing a car wheel are circulating online today.

In 2012, CDT identified 118 terms blocked from Weibo search results around the anniversary of the Tiananmen Massacre. Many of those terms are now blocked again. There is also overlap between this list and Jason Ng’s automated test results, reported today by Citizen Lab.

CDT reported more censored keywords related to Tiananmen on May 25 and 28. Compare this year’s blocked terms to last year’s (lists one and two).

As of June 3, the following search terms are blocked on Sina Weibo (not including the “search for user” function).

Events:
• take to the streets (上街)
• against bureaucratic profiteering (反官倒): The first half of a slogan from the Tiananmen protests. The second half is “against corruption” (反腐败).
• tank (坦克)
• martial law (戒严)
• student movement (学运)
• student strike (学潮)
• suppress (镇压)
• massacre (屠杀)
• march (游行)
• Beijing massacred (北京屠城): 屠城 túchéng literally means to slaughter all the inhabitants of a conquered city.