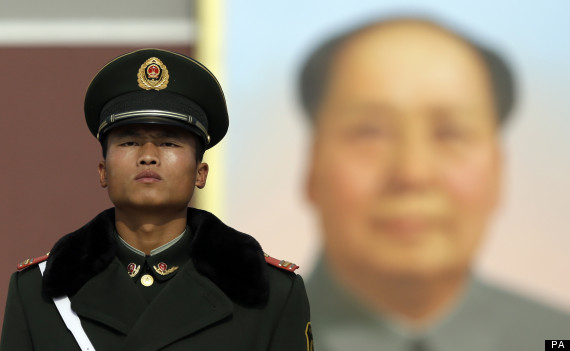 China’s Communist Party leaders issued a memo in April known as Document No. 9 to warn cadres of seven forces threatening the party’s domestic legitimacy, according to The New York Times, including “Western constitutional democracy” and other liberal policies such as “universal values” of human rights. Chris Buckley reports that the directive has the “unmistakable imprimatur of Xi Jinping:”

Even as Mr. Xi has sought to prepare some reforms to expose China’s economy to stronger market forces, he has undertaken a “mass line” campaign to enforce party authority that goes beyond the party’s periodic calls for discipline. The internal warnings to cadres show that Mr. Xi’s confident public face has been accompanied by fears that the party is vulnerable to an economic slowdown, public anger about corruption and challenges from liberals impatient for political change.

“Western forces hostile to China and dissidents within the country are still constantly infiltrating the ideological sphere,” says Document No. 9, the number given to it by the central party office that issued it in April. It has not been openly published, but a version was shown to The New York Times and was verified by four sources close to senior officials, including an editor with a party newspaper.

Opponents of one-party rule, it says, “have stirred up trouble about disclosing officials’ assets, using the Internet to fight corruption, media controls and other sensitive topics, to provoke discontent with the party and government.” [Source]

Buckley adds that Xi is “cherry picking” his policies by indicating a willingness to pursue Western-style economic reforms yet shifting to a more conservative stance on political and social issues. Business Insider’s Adam Taylor pointed out that Document No. 9 resembles another memo mentioned by Michael Sheridan in The Sunday Times in May:

The similarity between the two reports seems to suggest that these seven issues (or some variation on them) must be what really keeps the Chinese elite up at night. And that’s not exactly surprising — China has been keen to modernize without creating its own Gorbachev-moment.

It’s still a little disheartening, however, for those who remember reading speculative talk that newly installed President Xi Jinping could be a great reformer. Most analysts say Xi has left the reformist wings of the Communist Party disappointed in his first few months in power, harking back to Mao more than they’d care for, and the new memo is said to have come from the top. [Source]

Document No. 9 is consistent with what David Bandurski at China Media Project called the “relentless” counterattacks against advocates of political reform, and another more recent internal party notice called for a crackdown against illegal assembly and “crimes that endanger state security.” In the August 11 edition of Caijing magazine, Peking University constitutional law professor Zhang Qianfan wrote that the second notice threatens peaceful assembly as protected under the Constitution. From Dui Hua Foundation’s Human Rights Journal, which translated the original piece:

On June 20, 2013, the Supreme People’s Procuratorate issued a “Notice on Making Full Use of the Procuratorial Functions to Thoroughly Promote the Building of a Peaceful China” (hereafter the “Notice”). On the one hand, the Notice calls for severity in combatting especially major and serious criminal cases involving safety and accidents, such as those involving threats to food or pharmaceutical safety, public health, environmental pollution, damage to natural resources or fires, mining disasters, or serious traffic accidents. On the other hand, the Notice calls for severity in accordance with the law in combatting crimes that endanger state security, earnest support for political security, and resoluteness in combatting criminal activity such as illegal assembly and gathering a crowd to disrupt social order or a public place with the goal of subverting state power.

[…] The Notice requires investigation and punishment in accordance with the law of the corruption behind especially major and serious criminal cases involving safety and accidents and the serious investigation of crimes of office such as corruption, bribery, and malfeasance. This is commendable, but the experience of past years has taught us that corruption and malfeasance cannot be fully investigated only by the procuratorate’s efforts. Especially in a broader context in which independent procuratorial authority does not enjoy full protection, exposure of the corruption and other crimes of many officials has relied on public whistleblowers. If the public’s channels of expression are blocked or the Criminal Law is used to punish the public-spirited, conscientious, and courageous expression of responsible citizens, then the only result will be a chilling effect on the people of noble character in this realm, people of base character will increasingly have nothing to fear, and it will be difficult to realize “peaceful China.” [Source]

Dui Hua also suggested that the June notice “may be one impetus” for the recent detentions of Xu Zhiyong and Guo Feixiong on similar charges of “gathering a crowd to disrupt social order.”