A Mongolian Shaman in Atheist China 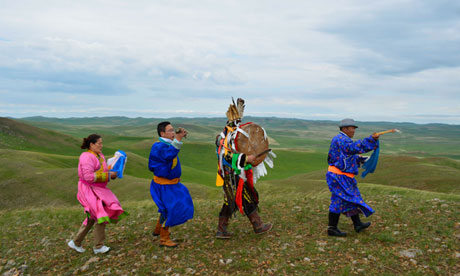 The Guardian’s Jonathan Kaiman visits a herder-turned-shaman who acts as a “short cut” between other Inner Mongolians and a way of life that has now been largely swept away.

The shaman of Xi Wuqi city wakes before sunrise on a Wednesday morning in June, piles his family into his silver Peugeot, and drives out beyond the city’s boxy mid-rises, past miles of strip-mines and coal refineries, and to the foot of a broad kelly-green hillside on the grasslands. He hikes to the top, removes his trainers and button-down shirt, and dons a black robe and a feather headdress. Then he gets to work.

[…] Experts say that this sentiment – the desire to reconnect with a forgotten past – is nearly ubiquitous in China, a natural byproduct of rapid change. “Because of modernisation, and now urbanisation, traditional culture is vanishing and being replaced by western culture, and under such conditions, people realise that these things are worth protecting,” said Tian Qing, the head of the Chinese Intangible Cultural Heritage Protection Centre and a prominent adviser to the government on cultural affairs.

“Right now, Chinese society is like a pot of soup, and it’s boiling over the top. Have you ever cooked? You think that’s not going to hurt you? People here get psychological problems. There’s pressure. There’s difficulty. And so they look towards religion for comfort.” [Source]

Similar patterns of tenacious traditionalism can be seen among dislocated communities in Xinjiang and Tibet, where writer Woeser observed pool tables repurposed as part of a traditional roadside shrine outside one new village. While most Chinese, unaffected by issues like land seizures and resettlement policies, appear broadly optimistic, the “boiling soup” also includes suicide protests and acts of frustrated violence among the country’s Han majority, as well as Tibetan self-immolations, violence in Xinjiang and protests in Inner Mongolia.