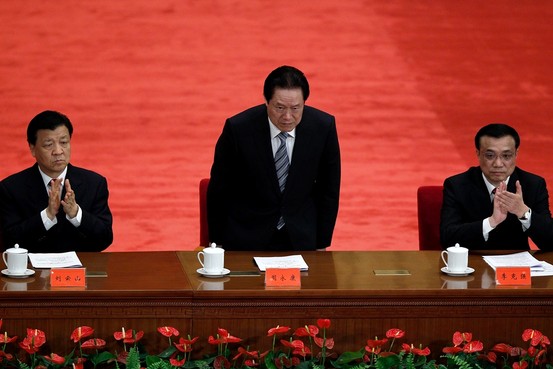 Some analysts speculate that the recent series of anti-corruption investigations into some of China’s top oil officials, including former China National Petroleum Corporation chair Jiang Jiemin and others associated with Zhou Yongkang, may be driven by inner-Party struggles and an attempt to “weaken the vested interests that have long hindered reforms in China’s oil industry.” From The Wall Street Journal:

Among industry insiders and analysts, the consensus seems to be that a key factor behind the probes is Mr. Zhou’s political support for Bo Xilai, a former rising star of the party who was tried last month for corruption and abuse of power, a year after his wife was convicted of murdering a British businessman.

The investigations also appear to be designed to weaken the vested interests that have long hindered reforms in China’s oil industry, and to send a clear message to the rest of the state sector as Chinese leaders brace for a prolonged slowdown in economic growth, party insiders and analysts say.

[…] By targeting Mr. Zhou’s network ahead of a key party meeting in November —when a package of economic reforms is expected to be unveiled—Chinese leaders may also be attempting to remove some of the obstacles to future efforts to tackle corruption and inefficiency, industry and party insiders say.

[…] “There’s definitely a political struggle going on, but in the longer term this might benefit the industry,” said Li Xiaofei, an expert on China’s energy industry at York College of Pennsylvania. [Source]