One Big V Who Still Speaks Out 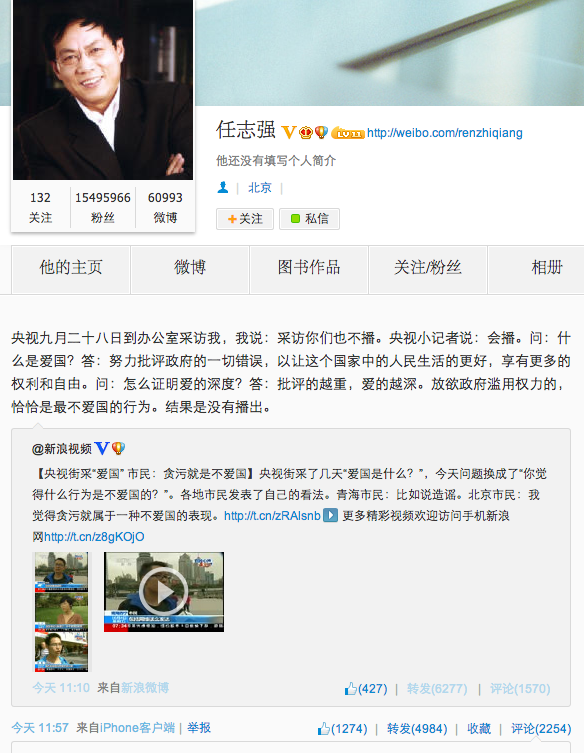 Several Weibo celebrities were chastised in August and September. First, “Big V” Charles Xue, an outspoken Chinese-American businessman, was detained for involvement in prostitution, then shown on CCTV confessing to reckless writing, and stating that “freedom of speech cannot override the law.” Bloomberg tracked the ensuing attrition of his followers. Soon after, real estate mogul Pan Shiyi, whose Weibo activity helped promote more accurate air quality measurements in Beijing, lost his typical confidence in a CCTV interview, stammering that Big Vs should be disciplined role models. 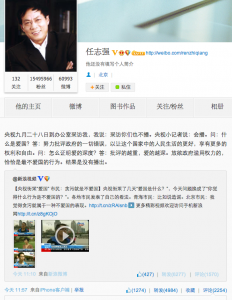 This all happened around the announcement of a new legal interpretation that could land an Internet user in jail for up to three years for sharing “false information” that is then reposted more than 500 times.

One notable voice that has not been curtailed yet belongs to Ren Zhiqiang, head of the Hua Yuan property firm. When activist and fellow businessman Wang Gongquan was detained in September on suspicion “gathering crowds to disturb social order,” Ren called it a “dark night.” Earlier this year, he spoke out in support of freedom of speech during the Southern Weekly protests.

How long Ren can remain this active is hard to say, but he continues to push towards those invisible boundaries. On October 4, he told his followers about his failed participation in a CCTV interview for a program in which people were asked what patriotism meant to them:

@任志强: CCTV came to my office on September 28 to interview me. I said, “You won’t broadcast it.” The reporter said, “Yes, we will.” Q: What does it mean to be patriotic? A: To criticize every mistake the government makes so that the people have a better life, more rights, and more freedom.” Q: How do you prove your level of patriotism? A: The more you criticize, the deeper your love of country. Forgiving the government for its abuse of power is exactly how not to be patriotic. They didn’t air my comments.

Among the comments that did make it on air: “Spreading rumors is unpatriotic” (造谣就是不爱国).

Two days after Ren’s comment, Weibo user “Yaba” (哑巴), who appears to be one of the reporters involved in the interview project, posted a retort:

@哑巴:  What Does Love of Country Mean to You?: 6-part series that wraps up today and will be rebroadcast on the news channel from 3 to 4 p.m. My partner and I traveled all over the country interviewing over 2000 people, but only 100 people made it on air. Chief Ren, who was busy worrying he would ejaculate prematurely, was not among them; after he came he couldn’t play anymore. Ren says that the more vicious your abuse, the deeper your love. Sounds like he’s into S&M. I hope he treats his wife, kids, employees, and his old pal Pan the same way.

“Yaba” means “mute.” Her profile reads, “better to be a mute than to tells lies” (开口若是谎话，不如做个哑巴). Some commenters have questioned the logic of her strike at Ren, though others have left thumbs-up emoticons. 雪雨依 asks, “You’re mute, and you still want to silence others?” (你自己是哑巴，还想把别人也变哑巴？) Still others have asked that she identify herself–Yaba does have a verified account, but she doesn’t give her real name.

Attacks like Yaba’s may not have any real impact on outspoken Big Vs, but they are indicative of the ongoing restriction of Weibo. As the central government seeks to stomp out rumors online, they also quell dissent.