River Crabbed: A World Without Weibo 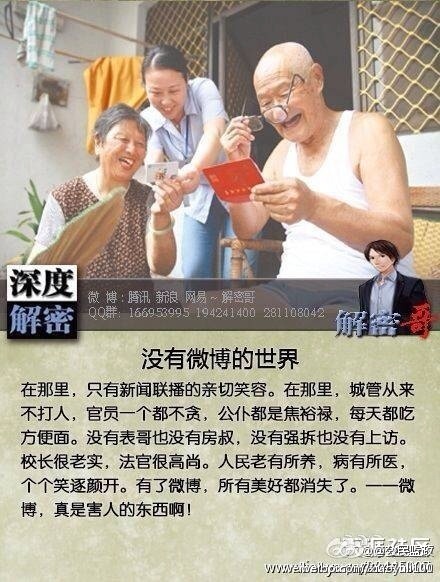 The following censored weibo was selected by CDT Chinese editors from FreeWeibo.

Weibo is the premier spot on the Chinese Internet for whistle-blowing and dissent. “Netizens” (网民) have exposed the liaisons and luxurious tastes of local officials, bringing down the likes of Lei Zhengfu and “Watch Brother” Yang Dacai. In an effort to weaken Weibo, the central government has introduced harsh punishments for any misinformation which spreads too widely online and publicly chastised Big Vs (Weibo celebrities). “Brother Decoder” (解密哥) surmises that China would be much “better off” if Weibo had never been invented in the first place:

A World Without Weibo

There, we have only the friendly smiles of News Simulcast. There, chengguan never beat people up; government officials never take bribes; public servants are all Jiao Yulu and eat instant noodles every day. There are no watch brothers or house uncles; no forced demolitions or petitions. School headmasters are honest and judges noble. The elderly are cared for and the sick are treated. Everyone beams with joy. When Weibo came, all the goodness vanished. Weibo truly is harmful!

Via CDT. Translation by Mengyu Dong.