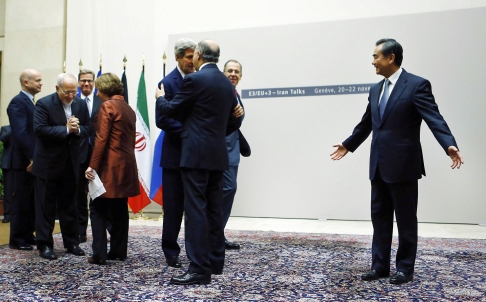 China’s Foreign Ministry has come out in praise of the international agreement on Iran’s nuclear program that was reached over the weekend. Xinhua reports:

China welcomes the agreement and appreciates the flexible and pragmatic attitudes of all parties during the negotiations, he said.

The deal will help maintain the world’s non-proliferation system and peace and stability in the Middle East, favor normal activities of all parties with Iran, and better the life of the Iranian people, Wand said.

The Chinese foreign minister emphasized that the content of the agreement covered the concerns of all parties and the next key step is its implementation.

He noted that the fact proved that a proper solution could be found no matter how tough an issue is, as long as all parties adhere to dialogue, keep patience, and demonstrate goodwill.

China, as an important member in the dialogue, always advocates a peaceful solution to Iran’s nuclear issue through negotiations and keeps close contacts with all parties, and China has played its role and shoulder its responsibility for the conclusion of the deal, Wang said. [Source]

The South China Morning Post notes that Beijing played an important role in brokering the deal in Geneva, which will limit Tehran’s capability to make nuclear weapons in exchange for a gradual lessening of sanctions on the country:

China is one of the five UN Security Council committee members who along with Germany negotiated the deal for Tehran to limit uranium enrichment to low levels.

Analysts say China pulled off a delicate balancing act in the negotiations between Iran, seen by Beijing as a long-term partner, and the US.

Hua Liming, the former Chinese ambassador to Iran, told state media that China acted as a helping broker. “When the two parties came across irresolvable problems, they would come to China, which would ‘lubricate’ the negotiation and put things back on track,” he said.

Coverage from AFP notes Beijing’s interest in a stable Middle East and commitment to defusing conflict in the region through diplomacy rather than force:

Beijing is keen to avoid instability in the Middle East as it is heavily dependent on oil to power its fast-expanding economy.

It has also long called for issues in the region to be solved through diplomacy rather than military intervention. Along with Russia, China has previously blocked efforts by Western nations at the UN to take a hard line over Syria. [Source]

China is currently the world’s largest net importer of oil. In August, Beijing circumvented U.S. sanctions on Iranian oil by importing convertible fuel instead of crude.