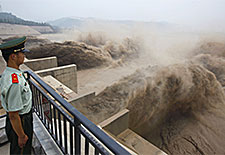 China has built 22,000 dams taller than 15 meters since the 1950s, displacing some 16 million people. After a lull in recent years, construction is expanding again. Hydropower has been credited for a substantial slowing in growth of the country’s carbon emissions; but the “hydro-industrial complex” has been blamed for social and environmental problems including the reported ecological collapse of the upper Yangtze river, and even with unwittingly triggering natural disasters such as the devastating 2008 Sichuan earthquake.

These assertions are largely untrue. Instead, China’s mega-dams block the flow of rivers, increase the chances of earthquakes, destroy precious environments and shatter the lives of millions of people. Rather than benefiting populations with non-polluting power, China’s dam builders are making a Faustian bargain with nature, selling their country’s soul in their drive for economic growth.

[…] Although hydroelectric dams produce considerably fewer carbon emissions than coal-fired power plants, China’s assertions that dams provide clean energy are substantially untrue. The rotting of inundated trees and vegetation in reservoirs emits the greenhouse gasses, carbon dioxide and methane, that rise from reservoir surfaces. Whenever water levels drop, rotting vegetation is again exposed and methane emissions increase. Estimates of emissions vary widely, depending on the climate where the dam is built, the amount and type of vegetation flooded, and the depth and age of the reservoir. Over a projected lifetime of a dam in temperate regions, emissions could be from roughly one-third to nearly two-thirds that of a natural gas plant. In warm and densely forested areas, such as China’s southwest, the emissions could be higher, particularly in a plant’s early years of operation. Dam building also includes indirect emissions from development of a dam site, manufacture and transport of materials and equipment, waste disposal, and, eventually, decommissioning. [Source]

Meanwhile, Global Times’ Zhang Yiwei reports responses to the claim of the upper Yangtze’s ecological collapse in a recent joint report by the Ministry of Agriculture and the World Wildlife Fund:

“I agree with the conclusion of the report that the ecology along the Yangtze River has deteriorated significantly, but it is as a result of overfishing and water pollution,” Zhang [Boting, a senior engineer from the China Society for Hydropower Engineering] told the Global Times, adding that the hydropower projects benefit the ecosystem as artificial breeding has helped save some endangered species.

[…] But according to Zhao Yimin, director of the Yangtze River fishery resources management committee office, fishes should not be sacrificed for the cause of economic development as knowledge of extinct species could be critical for future research.

[…] Zhao said he opposed the construction of hydropower projects in an “unconstrained and irregular pattern,” as dams change the environment and accelerate extinction of some species. [Source]

If hydropower does not offer an acceptable low-carbon alternative to coal and natural gas, nuclear power might. Four prominent climate scientists argued in an open letter on Sunday that “in the real world there is no credible path to climate stabilization that does not include a substantial role for nuclear power.” China’s current plans do include nuclear power, but on a relatively small and diminished scale amid post-Fukushima safety concerns and widespread popular opposition.