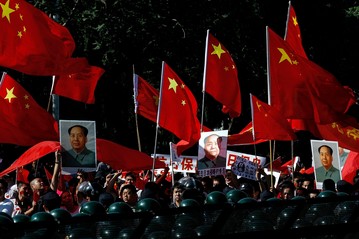 Ma prepared five statements that reflect either leftist or rightist views. Respondents were asked whether they agreed, disagreed or were neutral on the statements. The statements are:

Respondents were only labeled rightist or leftist if they agreed with all the statements on one side and rejected all statements on the other side. All other respondents were described as centrists. Given those stringent conditions, the small percentage of leftists among respondents is a solid indicator that support for official ideology and conservative approaches to economic and political governance is rather thin among Chinese Internet users. [Source]

Both age and gender appeared to be fairly strong indicators of political inclination, Lu writes, whereas income, education, and Party membership did not.

Netizens’ political leanings are not necessarily reflective of the general population’s, however: as one Weibo user put it, perhaps hyperbolically, “get onto Weibo you think China is not far from democracy. Go onto the streets you realize the Cultural Revolution is not over.” (Head beyond the streets, and you might encounter someone who doesn’t recognize China’s president.) Moreover, liberal attitudes that netizens show when prompted may lie dormant much of the time, and have little to do with their usual online activities. As Mark “Dashan” Rowswell commented on a recent Sinica podcast:

In the three years I’ve been on Weibo, I have been a front-row witness to the Weibo boom and subsequent decline as users increasingly migrate to WeChat. In talking with friends, fans and acquaintances, the main reason people give is that Weibo is too depressing and the online discussion is too angry. It’s still a great place to follow celebrities, but most users are frankly not that interested in the debate over constitutionalism or the endless exposition of social evils and corruption. Political junkies love that stuff, can’t get enough, but ordinary grassroots Weibo users gradually tune out. It’s depressing and they feel it’s irrelevant to their daily lives.

This is what I feel is missing from the Western discussion of Weibo, whether in this podcast or on sites like Tea Leaf Nation in general. We only ever discuss the political slice of the big pie, and then only from the perspective of activists who are (to say the least) out of favor with the Chinese state. This only helps reinforce the perception that Weibo is all about the people vs. the state, to repeat the grossly-overused analogy: a cat and mouse game. It’s a very limited and facile view that distorts our Western understanding of social media in China. [Source]