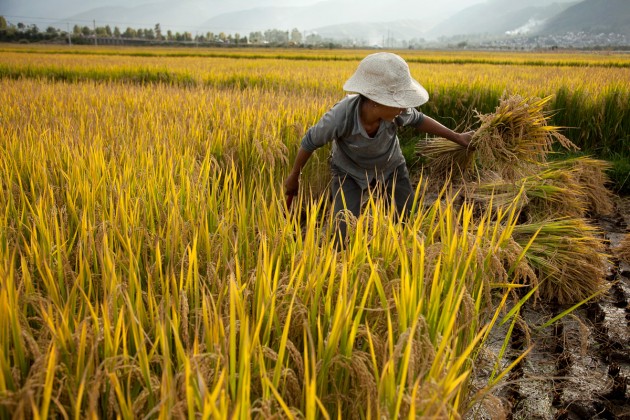 Local government seizure of farmland is a major cause of social unrest in the Chinese countryside, and existing land use policy has been identified as a major cause for the massive wealth gap between urban and rural residents. Changes to rural land policy were among the priorities outlined in the “blueprint for reform” released after the 18th CCP Congress’ Third Plenum last week, and once implemented are expected to boost income in rural households and increase overall consumption. Bloomberg Businessweek’s coverage of possible land reform in China outlines the system as it has long existed:

The present system dates back to the early days of the People’s Republic and classifies all rural land as collectively owned. That murky status restricts farmers from selling the land they live on, while local governments are largely free to take it—sometimes forcibly—and convert it to industrial and commercial uses, providing a key source of their income.

Authorities usually sell the seized land for 18 times what they paid the farmers, estimates Li Ping, senior attorney at the Beijing office of Landesa, a Seattle-based nonprofit that focuses on land-rights issues. This contributes to rising social instability, with farmers protesting land grabs, and it keeps the rural population poor, Bloomberg Businessweek reported earlier this year.

It can’t all be labeled rapacious land-grabbing, however. With local governments responsible for 80 percent of spending, including for their citizens’ education, health, and pensions—but getting only about 40 percent of China’s total tax revenues, according to World Bank estimates—the reliance on alternate sources of revenues such as land sales is understandable. According to China’s Ministry of Finance, local governments’ land-sale proceeds totaled 2.67 trillion yuan ($438 billion) last year, equivalent to more than half their total tax revenue, Bloomberg News reported on Sept. 24. [Source]

While new measures to safeguard farmer’s land rights could help to mitigate social unrest in the countryside, The Wall Street Journal reports that Beijing also sees land reform as a way to increase China’s overall economy:

China is studying new ways to measure the size of its economy to reflect ambitious reform plans to make it easier for farmers to sell their land and to take into account property values.

The new methods, which dovetail with an economic blueprint for reforms agreed on at a key meeting of Communist Party leaders that ended last week, are likely to increase the size of China’s economy, already the world’s second largest, according to the National Bureau of Statistics.

[…] China’s Communist Party leaders unveiled a broad program of reforms last week. One of their objectives was to make it easier for farmers to sell the right to use some of their land. Farmers don’t own their land, but have the right to use it. Among a number of changes outlined in a document released Friday, China’s leaders pledged to boost income for rural residents by giving them more property rights, allowing them to mortgage their property and envisioning experiments in letting farmers sell their land. [Source]

No specific national plan of action for land reform has yet been laid out, but local pilot programs may be stepping-stones toward sweeping change. AP reports on experimental land use policies being rolled out in Anhui, a province where successful (and then illegal) 1978 land experimentations went on to become the national model for farm de-collectivization:

An eastern Chinese region is experimenting with letting farmers mortgage or transfer control of their publicly owned land, in what could help spread prosperity to the impoverished countryside and become one of China’s most pivotal rural land reforms in 35 years.

[…P]olicy changes in China often come as a result of small-scale experiments carried out by local officials acting on signals from national leaders. Successful experiments — those that fulfill goals without sparking any social instability — are rewarded.

[…] Last week, the Anhui provincial government issued a document saying it would experiment with new land rules in 20 of its rural counties and districts.

It said rights to the publicly owned plots could be transferred, sublet, mortgaged, or turned into business shares — which could result in consolidation of land into bigger, more efficient farms. The statement does not clarify how control would be transferred, or what time or other constraints might be placed on a recipient’s lease. [Source]

The New York Times reports that local governments reliant on the proceeds from land sales are likely to resist the central leadership’s renewed commitment toward land reform:

The government is signaling a desire to blunt local government opposition to land reforms,” said Professor Prasad of Cornell, noting language in an earlier statement from the Central Committee meeting. “Loss of revenue for local governments as a result of land reforms will presumably be partially compensated by changes to the tax and expenditure systems.”

But many local officials will still resist or try to evade policies that reduce land revenues, said Tao Ran, the director of the China Center for Public Economics and Governance at Renmin University in Beijing. The officials do not believe that the new transfers from the central government will be enough to compensate for their loss of those revenues, he said.

“There will be strong opposition in terms of implementation,” said Professor Tao in a telephone interview. “The local governments often have such big debts that they don’t want to give up their monopoly control of farmland. A lot of their borrowing is mortgaged by land.” [Source]

A similar commitment to land reform was made by the central leadership after the 2008 Third Plenum, though little change was seen. For more on land rights or the urban-rural divide, see prior CDT coverage.