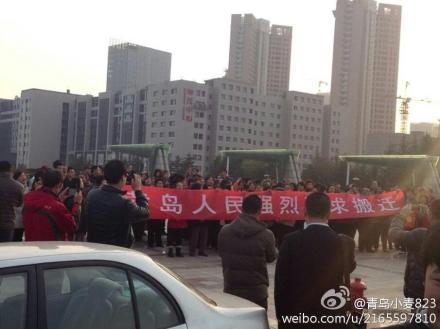 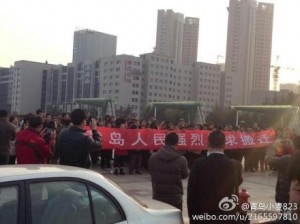 Residents of Huangdao, the district of Qingdao where an oil pipeline explosion last Friday has left 55 dead and over 100 injured, continued to protest today, many asking to be relocated. Meanwhile, at a meeting held today near the scene of the blast, Qingdao Party secretary Li Qun said that

[we] must strengthen control of social stability, strike hard against criminal behavior, protect the lives and assets of the masses, scour the land investigating people to find lawbreakers deceiving others with rumors, and guarantee the overall stability of society.

Netizens quickly picked up on the phrase “scour the land investigating people” as evidence that the Qingdao government is ramping up stability maintenance.

Li Qun has previously claimed to have been a mayoral aide in the U.S., a claim met with skepticism from many netizens. On December 5, 2011, CDT found that the keywords Li Qun’s name (李群) and the title of his book I Was a Mayoral Aide in the U.S. (我在美国当市长助理) were both blocked from Sina Weibo search results (see our sensitive words spreadsheet).

Li Qun was the Party secretary of Linyi, Shandong from 2002 to 2007. Chen Guangcheng, the blind lawyer who escaped house arrest and came to the U.S. in 2012, was arrested and imprisoned during Li’s tenure.

But Li’s current Weibo critics are focused on today’s statement, which they believe stresses social stability and quelling rumors at a time when people’s safety should be at the forefront.

@酘薿翫: This stinks to high heaven. The one he needs to investigate is himself.

@行宫流水: In his long tenure in Qingdao, Secretary Li has ignored the improper construction of the Sinopec pipeline. He’s the one who most deserves punishment.

@SweetTears: When a disaster like this happens, the Party’s top priority is to suppress public opinion.

@骑士精神: Did 55 people die of rumormongering?!

@江畔愁雲: Social stability doesn’t depend on violence and suppression. If you do [your job] right and have the support of the people, there’s no need to fear rumors.