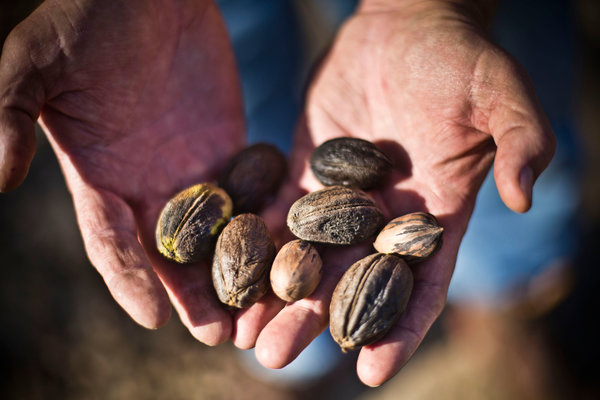 Kim Severson at the New York Times reports that unusually high pecan consumption in China, combined with a poor growing season, are causing the current pecan shortage in the United States:

A rare collision of ill-timed rain, marauding animals and a growing love affair between the Chinese middle class and the pecan has resulted in the worst pecan supply in recent memory. As a result, grocery store prices are up by about 30 percent, which is causing Thanksgiving bakers to think twice about their menus.

[…] In the mid-2000s, the market for pecans in China began to grow rapidly. China now consumes more than a third of the American pecan crop, a development that followed the country’s inclusion in the World Trade Organization in 2001.

“The ones that are real pretty on top of a pecan pie? Most of those have gone to export,” Ms. Krebs said.

[…] They are sold by the bagful and are particularly popular around the Chinese New Year, which is coming in January — earlier than last year, and soon enough to elbow out the Thanksgiving nut supply. [Source]