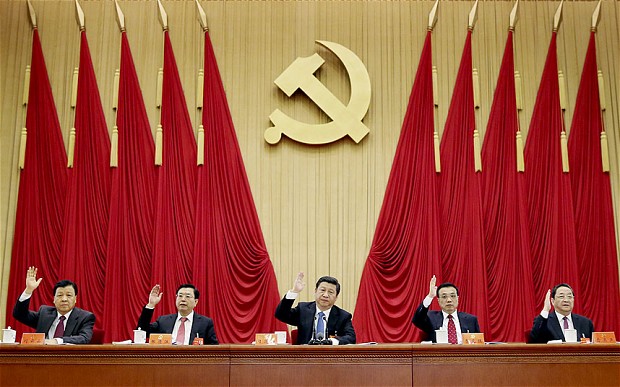 The highly-anticipated Third Plenum meeting of the Chinese Communist Party’s Central Committee has concluded in Beijing with the release of a lengthy communiqué laying out the plan for economic reforms. China Copyright and Media blog has translated the text. More specific policy changes are expected to be released in coming days or weeks.

As many expected, advancing the market economy was a focus of the economic policy reforms mentioned, with the market upgraded to playing a “decisive” role in the economy. From the communiqué:

The Plenum pointed out that establishing unified, open, competitive and ordered market systems are the basis for the market’s decisive function in resource allocation. We must accelerate the formation of a modern market system in which enterprises do business autonomously, with fair competition, free consumer choice, autonomous consumption, free flow of products and factors, and equal exchange, strive to eliminate market barriers, raise the efficiency and fairness of resource allocation. We must establish fair, open and transparent market rules, perfect mechanisms in which process are mainly decided by the market, establish a uniform construction and land use market across town and country, perfect financial market systems and deepen science and technology structure reform. [Source]

The BBC gives an overview of the policy announcement:

In a statement issued after a closed-door summit, they promised the free market would play a bigger role.

A new committee will oversee internal security to guard against social unrest, and farmers will be given more property rights over their land.

A BBC correspondent says the leaders will now have to persuade officials below them to implement the reforms. [Source]

Some critics said the communiqué did not go far enough in terms of providing a long-term vision for China’s economy. From the Wall Street Journal:

A fuller policy document will be released in coming days. But the communiqué provides a glimpse into the leadership’s top priorities as it hammers out new policies, and, as such, economists said it sends conflicting signals.

“This was an opportunity for the party to lay out a clear vision for where the country is heading,” said Mark Williams, an economist with Capital Economics. “If they had been able to do that successfully I think it would have had a big impact on the behavior of officials, but I don’t think they have been given a clear steer.”

Left unmentioned were many of the specifics economists had looked for: loosening Beijing’s control of interest rates and flow of capital in and out of the economy and efforts to reform a household-registration system that denies social services to rural migrant workers who come to urban areas. It did, however, call for more general financial and fiscal reform.
[Source]

For The Atlantic, Gwynn Guilford went so far as to say President Xi Jinping had “failed” at the meetings:

So did Xi deliver? Not really. The most important reform on the table is balancing the playing field between the state and private sectors. The plenum communique got off to a good start, saying, “The core issue is properly handling the relationship between the government and markets.”

Propped up by oligopolies, subsidies and cheap loans, state enterprises suck up resources that private businesses would use more efficiently. Shifting capital from the former to the latter is critical as a Chinese debt crisis looms and economic growth slows. It’s also a key way of reducing the cronyism that so infuriates the Chinese public and distributing wealth more equitably. But here’s what the communique went on to say:

Other key reforms are rural land ownership, reforming local government finances, and abolishing the hukou (household registration) system that creates two classes of Chinese citizens. There was nothing more than rehashed platitudes on those. [Source]

The information that was sorely missing from the Party’s 5,000-word wrap up memo was whether they are finally going to start getting the government priority they deserve. As Brookings China expert Cheng Li laid out in a recent analysis of the plenary, the dominant economic trend in China over the last few years as been what the Chinese call “the state advances as the private sector retreats.” It’s a trend that’s led to growing inequality, slower productivity growth, and a housing bubble, as TIME reported on this cover from 2011.

Unfortunately, the Third Plenum communiqué didn’t signal a major shift in that direction, and actually included a call to further “consolidate and develop the state sector.” As Mark William, Capital Economics chief Asia economist puts it, “reformers will struggle to push piecemeal efforts against the opposition of vested interests.” Which is too bad, because China has represented the majority of the world’s new growth since the financial crisis. Here are three reforms that could help spur more of it, both in the Middle Kingdom, and the rest of the world. [Source]

While we will have to wait for more specific policy proposals before giving a full assessment of the meetings, the government did announce some significant changes, including the establishment of a state security committee that will be tasked with coordinating agencies managing both domestic and international security threats. From Reuters:

Details of how the committee will work and when exactly it will begin operations were left unclear in the announcement, carried by state news agency Xinhua at the end of a key meeting of the ruling Communist Party to map out political and economic reforms.

Cheng Li, a fellow at the Brookings Institution in Washington and an expert on Chinese politics, said the idea was based on the National Security Council in the United States and would increase coordination between the various wings of China’s security bureaucracy, split now between the police, military, intelligence and diplomatic services.

[…] The new committee could also strengthen the powers of the domestic security apparatus, grappling with rising numbers of protests over pollution, illegal land grabs and corruption, as well as continued unrest in places like Tibet and Xinjiang. [Source]

The formation of the committee was announced in a very brief Xinhua dispatch.

According to government sources interviewed by Caixin Magazine, the plenum also decided on changes that would ease up long-standing family planning restrictions, the South China Morning Post reported. The reported changes were not announced in the communiqué.

Rural residents will also be given greater property rights, a consistent factor in recent incidents of social unrest. From the Global Times:

The new set-up will allow farmers to “equally participate in the modernization drive and share its fruits”. New agribusiness systems will be formed and more property rights should be given to farmers.

Equal exchanges of urban-rural elements and balanced allocation of public resources should be promoted. A healthy development mechanism for urbanization will be improved. “The urban-rural dual structure is a major barrier preventing the integration of development,” reads the communique.[Source]

An analysis by Malcolm Moore in the Telegraph says that the communiqué, and especially the formation of the state security committee, indicates an effort by Xi Jinping to consolidate his power after a year in office:

“Someone is trying to consolidate his power,” said Zhang Lifan, a historian, who cautiously did not openly name Mr Xi. “The establishment of this National Security Council grabs power from the Central Committee and from the Politics and Law Commission.”

Mr Xi has also taken the step of creating a new team that will report directly to the top leadership, rather than to the government, in order to push policies past a bureaucracy that looks increasingly ossified and resistant to change.

[…] While there were no further details on the make-up of the team, it could provide Mr Xi with a vehicle to drive his vision of the future past the traditionally consensus-led bureaucracy.

The president appears to have navigated a treacherous path past his rivals inside the Communist party to emerge at the end of his first year in power with a firm grip on all the levers of power. [Source]