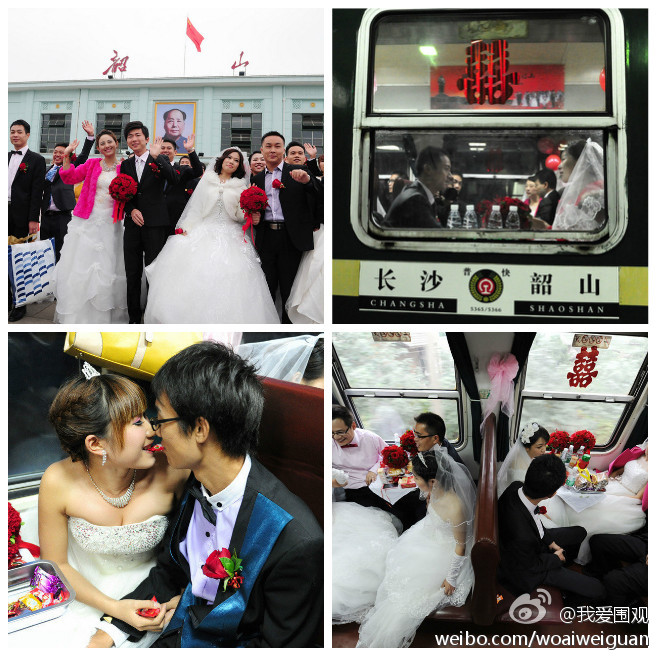 @我爱围观: 100 Newlywed Couples Vow To “Reject Frivolity in Marriage” Before Mao Statue: Yesterday, 100 newlywed couples rode the “Shaoshan No. 1” train to Shaoshan, where they took part in a mass wedding ceremony. Jiang Hanyu and Peng Shuqing, known as “China’s Most Happily Married Couple,” led the newlyweds in a vow before [Shaoshan’s famous] bronze statue of Mao Zedong: “From this day on, you must reject materialism, selfishness, and frivolity in your marriage. Define your marriage with sincerity for the rest of time.”

Jiang and Pen were apparently destined for a future together when they presented flowers to Mao as children, when he visited their Shaoshan elementary school in 1959.

Another Weibo user pointed out that these couples ignored the Great Helmsman’s womanizing ways:

@Fly的向日葵: These newlyweds sure lack common historical knowledge. They don’t even know about the tragic end to the stories of Yang Kaihui, He Zizhen and Jiang Qing…

As the New York Times’ Adam Century puts it, “The fact that the Chairman himself wasn’t exactly a ‘forever and ever’ kind of guy seems to have been lost on the participants.”