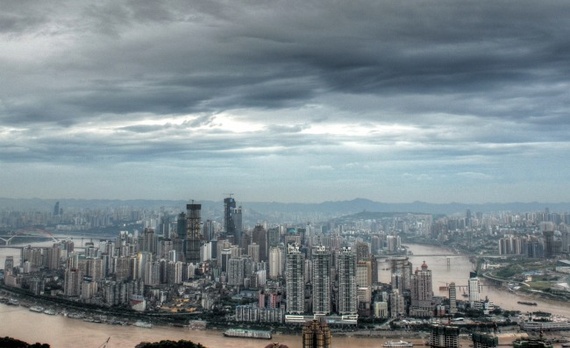 Amid a broad push for urbanization in China, Andrew Stokols explains how urban population figures are pulled in different directions by land classifications and household registrations. From The Atlantic:

In 1997, the Chinese Communist Party designated the southwestern city of Chongqing as China’s fourth “municipality,” carving an area about the size of South Carolina out of Sichuan province. […] Overnight, the Chinese government had created a conurbation of 28 million residents, leading Time magazine (among others) to label Chongqing “the world’s largest city.”

There was just one problem: Chongqing “municipality” has a lot of land that isn’t, well, municipal: In addition to the city itself, Chongqing now includes outlying suburbs, satellite cities, and ample countryside. If we were to consider just the city’s urban core, then Chongqing’s actual population is closer to 5 million—still huge, but not the biggest city in China, much less the world.

[…] Then, there’s then the question of the hukou, a “household registration” document that functions as an internal passport by tying an individual’s eligibility for social services like education and health care to his or her city of origin. Over the past three decades, hundreds of millions of rural Chinese people migrated to the cities in search of work, and settled despite not being official residents. Until recently, China’s census only counted residents with an urban hukou as part of the population, further skewing the data. [Source]

Click through to see figures illustrating these effects. The “Chongqing effect” Stokols describes also appears at lower levels: hundreds of counties have been reclassified over the past 35 years as county-level cities, a label that is often more aspirational than descriptive.