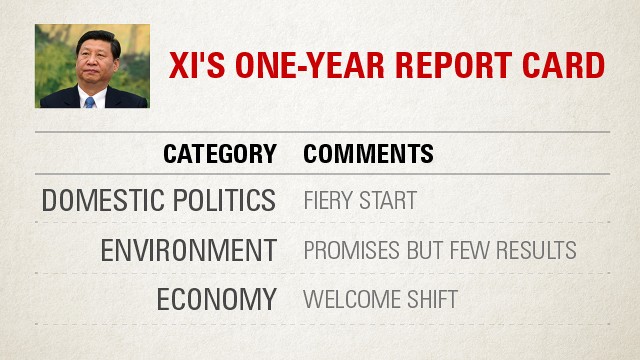 In a Xi Jinping “First Year Top Ten” list following the Communist Party’s Third Plenum, Jeffrey Wasserstrom argues that people should stop dwelling on the question of whether Xi is a reformer. From the Pacific Standard:

05. It’s high time to stop asking, as the South China Morning Post did yet again November 4, whether Xi “is a reformist or not.” He’s clearly interested in pursuing social and economic reforms. The Third Plenum includes calls for changes in the “one-child policy” (allowing more couples to have second children) for example, and for farmers to get more control over their land.

06. The “is he a reformer” question was never a good one to pose in either/or terms. Deng linked the word “reform” to that of “revolution,” which meant it, too, became invested with sacred significance. As a result, his successors have had no real choice but to express support for both “reform” and “revolution.” The better question to ask from the start would have been what kinds of reforms Xi would promote and what kinds he would resist. Xi seems ready to be bolder than Hu on the economic and social front (doing more, for example, to make the economy responsive to market forces), but to follow Deng, Jiang, and Hu in holding the line against political reforms (flagged by the expansive of the state’s security apparatus and by this past year seeing an uptick in the detention of moderate civil society activists). [Source]

At ChinaFile, Orville Schell focused on the question of who will benefit from Xi’s reforms:

Sun Yat-sen warned a century ago, “The individual should not have too much liberty, but the nation should have complete liberty.” Most Chinese leaders after Sun, right up until Xi himself, have worried very little about the sanctity of the individual and a great deal about the sanctity of a strong state. Sun counseled: “If we want to restore China’s liberty, we must unite ourselves into one unshakeable body and use revolutionary methods to weld our state into firm unity.” Xi Jinping would doubtless agree wholeheartedly with Sun, as did Chiang, Mao, and Deng before him.

So, the dicta flowing out of the Third Plenum would seem to have a clear logic to Xi: Without a unified leadership, a strong single-party state, and a dynamic economy that can create wealth, there will be no power. And, without power, China will, as was the case for over a century past, remain weak, preyed upon by outsiders. Thus, the real thrust of the recent policy prescriptions is not to protect individual freedoms—except in so far as loosening the bonds a little bit may allow more innovation—but to keep the economic engines of China turning at high RPMs, and keep the Party enthroned as an even more powerful and effective custodian over the process of national rejuvenation. This was Deng Xiaoping’s goal during his heyday when “to get rich is glorious” became the watchword of the hour. It is still true today, albeit with a far greater emphasis on national, rather than individual, wealth.[Source]

At CNN, three China analysts evaluated Xi’s efforts on domestic politics, the environment, and the economy following his first year in office. Brookings fellow Cheng Li praised Xi’s anti-corruption campaign, the outcome of the Bo Xilai trial, and his boost to the private sector, but criticized his “Mao-style” approach to censoring the media. Economist Louis Kuijs commended Xi’s focus on more sustainable economic growth with “less direct intervention and more facilitation of the market.” But Isabel Hilton, founder and editor of chinadialogue, criticized Xi’s efforts at improving China’s environmental problems:

There was not much cheer for environmentalists in the meeting that was billed as the most significant of Xi Jinping’s administration. At the close of the Chinese Communist Party’s Third Plenum on November 13, China’s official news agency, Xinhua, failed even to list the environment among its key points, focusing instead on the promise of economic reform.

Xi has recognized that prioritizing economic growth for 30 years has brought China to the edge of environmental collapse and he has promised to give environment the same weight as economic development. But 2013 was a year of dramatically worsening air pollution and mounting public frustration at the government’s apparent inability to halt China’s deforestation, maritime pollution, desertification and water and soil pollution. [Source]

Kerry Brown argued that, in the end, Xi comes out of his first year as president a winner, along with the Communist Party as a whole. From The Diplomat:

Yet if you want to find the real winner of the 2013 Third Plenum, look no further than a single remark found a few sentences into the report. While government ministries and state-owned enterprises are being tamed, the Communist Party itself faces no such restraints. The Plenum’s report shows that the Party maintains a position as privileged and pure as it did decades ago — utterly aloof, in the dead heart of the Chinese modern firmament. The report assumes that the Party is central to the whole project of continued national development, and thus no regimes of accountability or external regulations are laid upon it. The opening preamble of the Plenum Declaration simply makes the bold and categorical statement that the Party is essential for China and that a prosperous future is possible only under its leadership. With that brief mention, that Party’s name disappears from the document.

Politically, this means that Party leaders are the real winners of the 2013 Plenum, not the government, state enterprises, or the military or security apparatus. And that means Xi Jinping walks away with the best deal. Even Premier Li Keqiang has to grapple with new constraints on his executive role in the State Council, and start to look at how to make it responsive and accountable. But the Party, and Xi, sit apart from all of this. The Third Plenum of 2013 shows us that in terms of political tactics and skills, Xi Jinping is shaping up to be a formidable player. Like the great bridge player Deng Xiaoping, he has one powerful trump card in his hands: the leadership of the Party itself. Now he has to work out how the Party can maintain the extraordinary deal it has as China starts a period of accelerated reforms. [Source]

Indeed, Xi has already begun promoting his allies in order to successfully launch his reforms.  From Reuters:

Chinese President Xi Jinping plans to promote a string of allies in coming months as part of a sweeping reshuffle of the Communist Party, the government and the military, three separate sources with ties to the leadership said.

The reshuffle would allow Xi, who is also party and military chief, to deepen his power base and counter opposition to the bold reforms unveiled this month at the third plenum of the party’s leaders, said the sources.

The reforms, which included a relaxation of the one-child policy and letting financial markets play a greater role in the economy, were seen as an indication of how effectively Xi had been able to consolidate his power just a year after taking over as party chief. [Source]

Wang Xiangwei at SCMP predicts that Xi, who has now “fully consolidated his authority,” may become “the country’s most powerful leader since Deng” because he heads not only the party, the state and the military, but also newly-formed committees on economic reforms and national security:

Similarly, the new national security committee, which is thought to be modelled on the US National Security Council, would strengthen Xi’s central role in setting the agenda on foreign policy and domestic security. The panel is expected include top officials from the foreign ministry, the military, the police and the intelligence agencies.

These two new committees posts would allow Xi to wield more influence than either of his two immediate predecessors, Hu Jintao and Jiang Zemin. The result could again transform the country’s power structure.[Source]

On Twitter, former Mexican ambassador to China Jorge Guajardo cautioned against trying to divine the Party’s internal workings. “We have no way of knowing,” he argued, whether Xi is now “the strongest leader in China since Mao or Deng’s times.” But regarding the recent announcements’ implications for the direction of the country as a whole, Matt Schiavenza predicted at The Atlantic that the Third Plenum “give us a glimpse of what lies ahead for the country: centralized politics, market liberalization, a strengthened judicial system, and, as the recent experience with journalist expulsions go, greater information control.”  And according to former political secretary to Zhao Ziyang, Bao Tong, Xi’s plans for China are crystal clear: “He hopes to create this free, competitive market under one-party rule… He’s not hanging out a sheep’s head and selling dog meat. He’s hung out a dog’s head and is selling dog meat.”