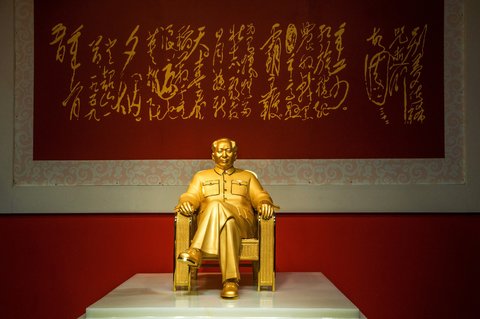 Chris Buckley reports for The New York Times that “the Communist revolutionary who rhapsodized the Chinese people as ‘poor and blank,'” Mao Zedong, is being commemorated this month with a golden statue worth U.S.$16.5 million:

China National Radio said on its website that the figure of Mao — appearing unnervingly slim — was covered in gold, jade and other gemstones, and was the work of more than 20 master craftsmen over eight months. The whole ensemble, including the 110-pound statue of the man and a white marble base, cost about 100 million renminbi to make, according to the craftsmen. The report did not say who sponsored or paid for the work.

“When the gold flashes, it captures the intense interest of the public,” noted the report. No doubt. [Source]

At That’s Mag, however, James Griffiths reports that celebrations have been postponed and merged with a New Year’s Gala as part of a push to tone down the festivities:

“The authorities don’t want the commemorations for Mao to be high-profile,” Wang Zhanyang, director of the Political Science Department at the Central Institute of Socialism, told the Global Times.

“Some regional conservative people and officials with vested interests want to restrain reform by falsely promoting some of Mao’s most conservative thoughts, which is not what the Party follows,” Wang said.

The move to deemphasise Mao’s birthday is a major change in policy after months of build up for the 120th anniversary gala. An animated TV show about Mao as a teenager has been commissioned, China Post issued a set of commemorative stamps and multiple locations across China which lay claim to Mao have already started celebrations. [Source]

This year’s long-planned celebrations threaten to become a headache for President Xi Jinping as he navigates between reverence for and repudiation of the former leader. From The Economist:

[…] Mao continues to exert a powerful influence over the party and public opinion. Mr Xi dares not play down Mao’s “contributions” for fear that outright de-Maoification could fatally weaken the party’s grip. A recent article in the party’s mouthpiece, the People’s Daily, said that a big reason for the collapse of the Soviet Union—an unadulterated tragedy, it was naturally understood—was the “negation of Lenin and other [historical] leaders”. As Communist China’s founder as well as the leader most noted for brutal excess, Mao is Lenin and Stalin rolled into one.

[…] Mr Xi paid a low-key visit to Shaoshan in 2011 when still vice-president. A museum there recounts that he remarked during his trip that Mao had saved his father from execution by leftist guerrillas in 1935, nearly two decades before Mr Xi was born. “One could say that without Mao my father would have been no more; without Mao there would be no Xi Jinping today. I will never forget this loving kindness.” Liberals have little to look forward to. [Source]