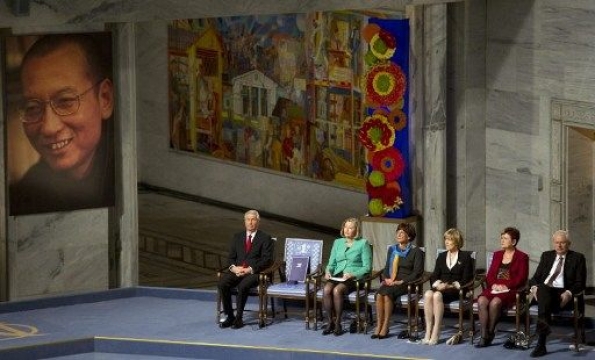 As China and the world pay tribute to one Nobel Peace Prize laureate, The Economist’s Gady Epstein marks the fifth anniversary of Liu Xiaobo’s most recent arrest with “a companion piece of the sort you won’t find in The World in 2014,” the latest of the newspaper’s annual special editions.

Liu Xiaobo, the 2010 Nobel Peace Prize laureate, once wrote that intellectuals are “the soul of a nation”. He saw this as a tragic assignation. The intellectual he describes is a “lonely forerunner” who “can discern the portents of disaster at a time of prosperity, and in his self-confidence experience the approaching obliteration.”

Mr Liu is fulfilling his own prophecy. He is unlikely to be heard from in 2014. He remains in a Chinese prison cell, in the north-eastern city of Jinzhou—not terribly far from Changchun, the city in neighbouring Jilin province, where he was born in 1955. He is less than halfway through an 11-year prison sentence for his intellectual crimes (officially, “inciting subversion of state power”). His wife, Liu Xia, may not be heard from either in 2014; she is under strict house arrest despite not having been charged with any crime, and has had only rare contact with foreign reporters. Her brother, Liu Hui, too will not be heard from; he was sentenced in 2013 to a harsh prison term for alleged financial fraud, a punishment, some believe, meant to cow the family into total silence. Obliteration indeed.

But to the Communist Party’s enduring frustration, the Nobel prize assures that Mr Liu cannot be totally annihilated. He is the dark matter in every earnest discussion about China’s future, the invisible antagonist in any talk of progress and reform. [Source]