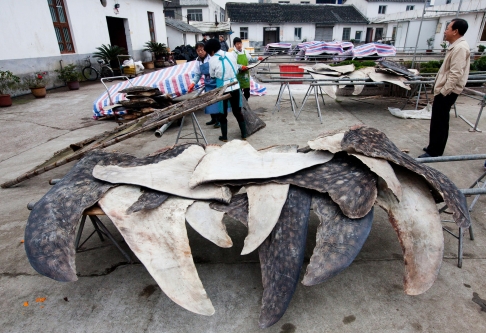 After a four-year investigation, Hong Kong-based conservation group WildLifeRisk has exposed what could be the world’s largest whale shark “slaughterhouse” outside of the coastal city of Wenzhou, Zhejiang province. According to the NGO, the China Wenzhou Yueqing Marine Organisms Health Protection Foods Co Ltd processes up to 600 of the threatened species each year along with other vulnerable shark types. AFP reports:

Hong Kong-based conservation group WildLifeRisk said it discovered the factory in the town of Pu Qi in Zhejiang province after a four-year investigation.

It said the sharks are slaughtered and processed mostly to produce shark oil for health supplements.

Undercover video footage produced by the group showed workers cutting up the large dotted back fins of whale sharks and other shark species.

[…] The slaughterhouse also handles other species of sharks including blue sharks and basking sharks and produces 200 tonnes of shark oil annually from the three species, its owner — identified only as Li — said in the video. [Source]

WildLifeRisk has published a full report on the Zhejiang factory, and has also made available photos from the investigation along with this video of the undercover conservationists talking with the factory owner:

In a joint-statement released today, Alex Hofford and Paul Hilton of WildLifeRisk said: “We went to Pu Qi three times in the last three years, and on each occasion the scale of the slaughter was truly staggering. “How these harmless creatures, these gentle giants of the deep, can be slaughtered on such an industrial scale is beyond belief. It’s even more incredible that this carnage is all for the sake of non-essential lifestyle props such as lipsticks, face creams, health supplements and shark fin soup. We are calling on China’s regulatory authorities to enforce the international agreements on this illegal activity now, before these animals are brought closer to extinction.” According to the Convention on International Trade in Endangered Species of Wild Fauna and Flora (CITES), to which China is a signatory, the international sale of products from an endangered species is illegal and the trade is unsustainable. [Source]

Hofford spoke to the South China Morning Post about the efficiency of Puqi’s geographic location for China’s illegal shark trade, noting other shark processing factories in the area:

“It’s exactly halfway on the seaboard of China,” he said.

A whale shark brought in anywhere along the Chinese coast, from Shandong province in the north to Guangdong in the south, could be transported to Puqi by truck within three days, said Hoffard.

“If you go in summer, there are fields and fields of fins being laid out to dry,” he said.

Hoffard said he saw about five to six shark processing factories on his two trips to the township, which has an area of 13 square kilometres and had a population of 38,462 as of 2004, and had heard of others in Xiamen, Fujian province. [Source]

The New York Times’ Didi Kirsten Tatlow spoke to another wildlife conservation activist, who offered her confidence in the authenticity of the WildLifeRisk report:

May Mei is the China program manager of WildAid, a nongovernmental organization based in the United States and China, whose public representative is the former basketball star Yao Ming and which campaigns to stop people eating shark fin soup. She called the report “pretty shocking” and “convincing.”

“Their photographs, the detail, the amount of time they spent doing it, the specific names they have, it seems very concrete,” said Ms. Mei.

“Domestic Chinese media are pretty shocked, too,” she said, but added that in terms of overall shark processing, China was not thought to be the biggest location any longer; Indonesia was. [Source]