Trends Shift in Tourism To and From China 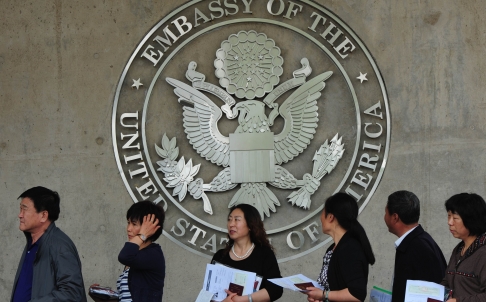 The number of foreign tourists visiting Beijing last year is set to show a nearly 10% drop from 2012, with infamous pollution and the rising yuan receiving much of the blame. From Kathy Tian and Liu Jing at China Real Time:

Jiang Yiyi, deputy director of the Institute of International Tourism at the China Tourism Academy, attributed part of the dropoff in foreign tourists to the strengthening yuan.

In 2013, the yuan appreciated almost 3% against the U.S. dollar, making “Beijing a more expensive destination than in the past,” Ms. Jiang noted.

[…] The Beijing Tourism Development Commission noted that the country’s battle with pollution is another obstacle cities face in attracting inbound tourists.

Heavy air pollution from Beijing, which saw its worst bout of smog in recent history in January, to Shanghai, where pollution levels went off the charts in December, certainly don’t do much to help attract tourists. [Source]

[… T]he 19.6% plummet in tourists from Asia excluding Hong Kong, Macau and Taiwan, suggests another factor: Heightened tensions over China’s recent attempts to assert greater influence over the East and South China Seas. Relations with Japan have been particularly dicey, and more Japanese tourists [44.8%] have ditched their trips to Beijing than those of any other country by far. [Source]

Given sometimes violent anti-Japanese protests across China in late 2012, fears for personal safety may have been as much of a deterrent as the underlying geopolitics. Continued tensions over maritime disputes and historical grievances appear to have done little to dampen wealthier Chinese tourists’ enthusiasm for Japan, which emerged as their most favored destination according to a Travelzoo survey reported by China Real Time’s Wei Gu. Here, again, shifting exchange rates were a major factor.

As many as 29% of survey respondents from mainland China ranked Japan as their top travel destination, significantly up from 18% in 2013. That may be surprising, given that tensions between Beijing and Tokyo remained frosty in 2013 over competing claims to a group of uninhabited islands in the East China Sea.

The weak yen has made Japan a new shopping paradise for deep-pocketed Chinese travelers. In 2013, the yen fell about 22 percent against the U.S. dollar, while the yuan appreciated almost 3% compared to the dollar in the same period.

[…] Japan has long been a popular destination for travelers from Hong Kong and Taiwan because of the country’s relative proximity and distinct culture. But it’s only recently that mainland Chinese travelers have begun to appreciate its scenery, food and atmosphere. Easing visa restrictions after the 2012 earthquake has also helped, according to Ms. Hong. [Source]

Somewhat loosened visa demands also boosted visits to the United States, helping it rise from fifth to second place. Even now, though, a Chinese passport is still far from a golden ticket for world travel, as South China Morning Post’s Chris Luo reports:

As of the beginning of this year, twenty countries grant Chinese passport holders visa-free entries, with Bahamas and Thailand expected to be added to the list soon. In addition some two dozen countries and territories also grant visa-on-arrival access or their equivalent to Chinese citizens.

However, this number still lags far behind the number for those holidaymakers from the majority of developed economies. Citizens from the United States and Japan, for example, are exempt of visa requirements to travel to more than 170 countries and territories, according to immigration consultancy Henley and Partners.

Hong Kong and Macau SAR passport holders have visa-free access to 152 and 118 destinations respectively. Even Taiwan, which only maintains diplomatic relations with barely two dozen countries, has visa-free entry status to 134 countries. [Source]

One explanation, according to a consular official quoted by Luo, is that “certain countries view Chinese people with a jaundiced eye, unwilling to accept us due to ideological disparities.” Global Times frankly stated that, in fact, “illegal immigration from China is the major reason why developed countries keep a firm grip on their visa policy,” but suggested that the balance might gradually shift “between the desire for more deep-pocketed Chinese tourists and the longstanding fear for illegal immigrants.” AFP’s Felicia Sonmez commented on Twitter, though, “that visa-free deals might be two-way street; China currently only gives abt half-dozen such treatment.” (Japan, AFP’s Huw Griffith added, is one of them.)